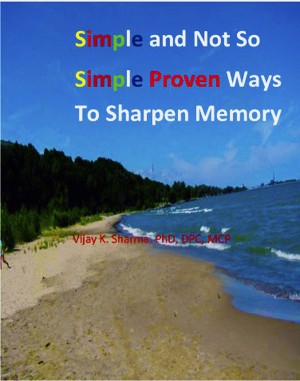 Simple and Not So Simple Proven Ways to Sharpen Memory

By Vijay Sharma
This Is A Must-Read E-book as It contains UNIQUE Ways For All Students, Parents & Teachers in Schools, Colleges, & Universities Who Want To Control Their Destiny & A Grand Success, Regardless Of The Study Disciplines. An E-book to Actualize Your Dreams into an Achievable Reality, Test it out & Recommend it to Your Friends! Once tried, always relied on, your best friend through thick and thin! More
The e-book is designed to improve earning potential through learning potential by sharpening memory as a tool and thereby improving quality of life based on a better and a much sharper way of thinking. In this author’s opinion, the book is worth every penny, even if those were made of gold or platinum. Accepting and following the systems/techniques in the book will narrow down the achievement gap and instill educational practices which will improve academic achievements. This in turn will lead to more money through a better paying job, prosperity, self-esteem and a better quality-of-life and all that a better purchasing power brings in.

This book is designed to improve earnings through learning’s while sharpening memory as a tool.
If someone answers “Yes” to any of the following questions, they are likely to benefit from reading the contents and their practice.
Would you like to improve your grades in schools?

Do you prefer a sense of accomplishment more than money?

Do you agree that a better memory is a much needed and often ignored asset to be a success in life?

Will you like to achieve goals of success, fame, recognition, self-love, advancement in your career and may be some more money?

The e-book, "Simple and Not So Simple Proven Ways to Sharpen Memory" by Vijay K. Sharma, PhD, DPC, MCP answers some of these questions, your wants, needs, prayers to fill some or many voids in your life and is designed the ways to steer the way to your success for sure! Practicing the contents of the e-book will reinvent you for your grand success!
Some short verses/notes to think over, seriously!

Dr. Sharma has 45 publications to his credit including 4 chapters in books from London, UK and 21 International/National Presentations. His 19 papers have been cited over 182 times as per Science Citation Index from countries around the world, such as, USA, UK, Canada, Japan, Germany, Netherlands, Luxembourg, and India, to name a few of those countries. This is heartening to know when greater than 97% publications do not get even one or two citations.
Literary Interests:
"Simple and Not So Simple Proven Ways to Sharpen Memory" is his latest e-book and is available at Kindle, Smashwords.com, and other popular websites, including those of authors own. Other literary works/e-books, such as, those on self-help, fighting and winning over type II diabetes, Love Poems in English and Hindi, "Before the Gallows" a translation of Hindi Novel "Phansi Se Pahle" which when translated to English means “Before the Gallows” by Shri Man Mohan Kumar "Tamanna" will soon be coming to the websites for sale as e-books. “Before the Gallows” is a story of a cop, his love for a blind girl, his child and his ending up on the other side of law to seek justice, what led to this and what will all this lead to…?

It PAYS To Enrich Memory, Brain Powers, Comprehension and Creativity
A Free video to watch for self-help, enriching memory, brain powers, concentration and creativity. The price of the e-book "Simple and Not So Simple Proven Ways to Sharpen Memory" has been slashed down from $39.99 to only $9.99 and the e-book copies are available at http://www.drsharmasmicroandnanopedia.com, Amazon.com, Amazon's Kindle, Google book store, http://www.Smashwords.com Buy a copy.

What to do for tests.mp4
The book "Simple and Not So Simple Proven Ways to Sharpen Memory" mentioned in the video will enable to ace tests. That means admissions to colleges of their choice for students and a better GPA than ever before. This means more money through a better paying job on graduation! Parents can make sure that their wards score well in their studies. Teachers can inspire confidence in their students

You have subscribed to alerts for Vijay Sharma.

You have been added to Vijay Sharma's favorite list.

You can also sign-up to receive email notifications whenever Vijay Sharma releases a new book.