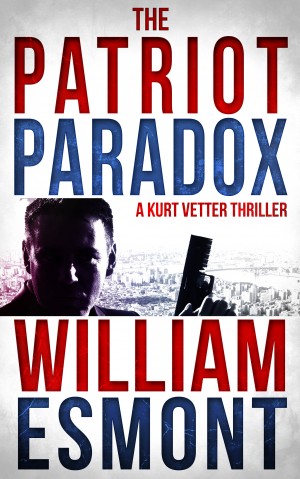 By William Esmont
Rated 3.83/5 based on 6 reviews
When ex-CIA analyst Kurt Vetter receives a package of encrypted files from his recently assassinated brother, he’s drawn back into the world of international intrigue he thought he had left behind forever. More
Ex-CIA analyst, Kurt Vetter is no stranger to tragedy and loss.  Swearing off any connections to a life he once lead, he retreats to South America--on a self-imposed exile.  But when he receives a mysterious package of encrypted files from his dead brother, he's drawn back into a dangerous world of treason and espionage--a world he swore he'd left behind for good.

It's up to Kurt to uncover the message that his brother was desperate to convey--a message that could be the difference between life and death.  When the files lead him across the world, he encounters Amanda Carter, an enigmatic woman linked directly to his brother, who just might have the information he needs to decipher what's hidden inside the files.  Together, they uncover a plot far bigger than anything he ever anticipated--a rogue CIA mission to detonate a nuclear bomb.

But with time running out and his brother's assassins closing in, Amanda and Kurt must face this alone. With millions of innocent lives at stake, they race against the clock to stop the attack.  If they fail, the results could be explosive.

William Esmont currently lives in the desert southwest. He is busy working on his next novel.

About the Series: Kurt Vetter

I received this book as part of a LibraryThing Giveaway. I have always liked the spy thriller genre, and this book does not disappoint. I liked how the plot unfolded, the locations, the use of technology, and how all the characters, both good and bad, were well-developed. I thought the ending was predictable, but I am looking forward to the next story in this series.

I enjoyed this book. I was originally concerned the length of the book was too short to allow a detailed full story, but was wrong with that concern. There could have been more character elaboration, but the story was not lacking without it. There was some solid thought with twists and turns put into how it played out. I liked that nobody was an unrealistic hero or villain. I am a computer guy so I appreciated the techie parts of the book. I found the twist at the end interesting.

Just prior to reading this book I read books 1-3 of Elements of the Undead Omnibus also by the same author William Esmont and liked it as well. I will be watching for future books from this author.

Note: This book was free and given to me with the expectation that I would review. The content of my review was in no way influenced by this understanding. The book speaks for itself and my review would have been worded just this way even if I'd gone out and bought it.

Thrillers are not always my genre. This offers a classical plot in a post cold war scenario. Narration seems sometimes discontinuous, some nice ideas but soon after you already know how all is going to evolve and end. An open final which already paves the way to a sequel.

"Mike's last thoughts, of his wife and children, flew through the back of his skull at four hundred and fifty feet per second"
The last sentence of the first chapter; I was hooked. Mike is...was...Mike Vetter, a CIA agent, likely killed by his own people. His brother, Kurt, himself a former CIA analyst, rushed home from Peru, where he was escaping the tragedy of the sudden death of his wife and daughter. Instead of mourning for his brother, he was thrust into what Mike was unable to complete before his death: getting the data Mike was killed for into the hands of Amanda Carson, a woman Kurt had never heard of, but one of the few people Mike trusted. As soon as he did, Kurt and Amanda were running for their lives, chased by rogue CIA agents that would stop at nothing to complete their mission.

The Patriot Paradox by William Esmont is a fast paced, story driven book; those looking for deep, complex characters will be disappointed.
One of the things I liked about the book was the use of technology. Cell phones, voice recognition, powerful search engines, and more; perfect for the conspiracy theorists and Big Brother types among us (sadly, mush of the technology highlighted is likely very possible, and should concern most of us...but that's for a different post!).
Though I generally enjoy more character development, I can appreciate a good story, too. This one was good, but could have been better; a bit more hot pursuit, some more close calls for our heroes, or keeping the secret of the threat to world peace a little longer.

If you're looking for an in depth mystery, The Patriot Paradox may leave you lacking. But if you need a quick read on a rainy Sunday, or a good vacation book to get lost in, it will be a home run! And since I'm on vacation, I just ordered the sequel, Pressed!

Would definitely recommend reading this novel. It is an easy read, and keeps you involved with the development of characters, and plot line.

You have subscribed to alerts for William Esmont.

You have been added to William Esmont's favorite list.

You can also sign-up to receive email notifications whenever William Esmont releases a new book.