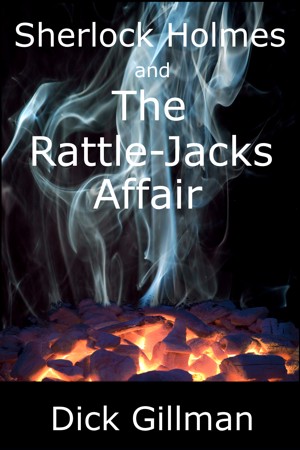 Sherlock Holmes and The Rattle-Jacks Affair

By Dick Gillman
Holmes and Watson are called upon to investigate the deaths of 'Little Alfie's' Aunt and Uncle. The police believe they have been murdered and Flora Smith, the daughter of the deceased couple has been arrested for the murder. However, on further investigation involving an incognito visit to the gasworks where Watson becomes a touch light fingered, Holmes believes that there is another explanation. More
Little Alfie of the Baker Street Irregulars seeks the help of Holmes and Watson as his cousin Flora has been arrested and accused of a double murder. The investigation gets underway with a trip to the scene of the crime.

Holmes is suspicious and, together with Watson, he travels incognito to The Imperial Gasworks. Their visit is both informative and productive involving a little deception and some slight of hand by Watson to obtain some Rattle-Jacks.

The postmortem confirms Holmes suspicions but he now has to gather sufficient evidence to convince the Coroner and the jury that this is not in fact a case of murder.

Dick Gillman is a Yorkshireman in his 70's. He retired from teaching Science in 2005 and moved to Brittany, France, in 2008 with his wife Alex, Truffle, the Black Labrador and Poppy, the cat. As well as writing, he is an accomplished artist and lives near the coast where the rugged landscape and the Atlantic ocean influence his artwork. He.still has strong links with the UK where he visits his two grown up children and his four grandchildren.

Watch out for further Sherlock Holmes short stories throughout 2020 and treat yourself to his very latest seven story collection, 'Julia Moriarty - in memorium' which contains all the stories in which Holmes crosses swords with the beautiful, but deadly, Julia Moriarty. This is available an e-book and can be found as a paperback at all major online bookstores.

You have subscribed to alerts for Dick Gillman.

You have been added to Dick Gillman's favorite list.

You can also sign-up to receive email notifications whenever Dick Gillman releases a new book.