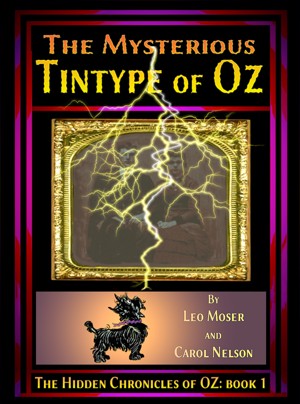 The Mysterious Tintype of Oz

By Leo Moser
Some months after her trip by tornado, a mysterious photograph summons teenage Dorothy back to Oz. A boy from Kansas accompanies her — or is it really him? In Oz, she faces mortal dangers. In the process she learns much about herself, as well as the alternate earth in which Oz exists — a world called Erdavon, where magic, not science, reigns. More
This is the tale of Dorothy’s return trip to Oz, as recorded by her long ago in the hidden Chronicles of Oz. These chronicles cannot be kept secret from her great-grandson Jeremy, who alone among her young descendants has inherited her magic. His future safety requires that he know crucial facts about Erdavon, the entire alternate world in which Oz exists.

Leo John Moser and Carol Marie Nelson are a father and daughter team.
Leo was born in that part of Los Angeles usually characterized as Hollywood, but he has seldom been there since.
He is a former diplomat and university professor. He has had several books in the non-fiction category published: The Technology Trap: Survival in a Man-made Environment, published by Nelson Hall Inc.; The Chinese Mosaic: The Peoples and Provinces of China. Westview Press; The Political Culture of the United States, Gavilan. He and Carol coauthored an Oz book published by Whitfield & Dodd Publications.
Carol was raised around the world, in Washington D.C., in Moscow, in Venezuela, in Taiwan, et alia. She has been active in script writing and resides in Burbank, California.

You have subscribed to alerts for Leo Moser.

You have been added to Leo Moser's favorite list.

You can also sign-up to receive email notifications whenever Leo Moser releases a new book.