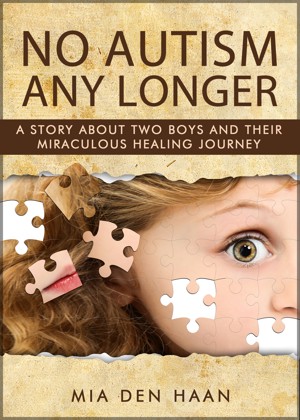 By Mia den Haan
Rated 5.00/5 based on 1 reviews
The book is about two little boys who both received a miraculous healing for their Autism. One boy who also suffers from cerebral palsy could initially not walk without falling, nor could he communicate well. He now speak sentences and has a normal communication and his mobility also improved a lot. He can now run and jump. It also includes Mia's own journey from Business Owner to Spiritual Healer More
This book describes the miraculous journey of healing Autism Spectrum Disorder for two little boys, Arlen and Jesse.
Arlen, was also diagnosed with cerebral palsy. He also experienced dramatic improvements with his mobility as a result of the spiritual healing. At first, Arlen could only walk a few feet before falling. Now he runs, jumps and walks down the stairs without any help.
The book also includes part of Mia’s journey and how it led from working in Information Technology, running her own software development company, to becoming a Spiritual Healer.
Ultimately Mia’s health issues caused her to make lifestyle changes. This became a major turning point in her life.
Jesse, who was first to receive healing for Autism had almost immediate results once he reached a certain age. Within two weeks of the first main healing his communication improved so much that he began speaking in full sentences. Several months later in February 2012, at the beginning of the school year, he went full-time back into the normal education system at a local primary school. Within twelve months of that first major healing he is now functioning like other children his age with excellent result at school.
Arlen who is slightly younger also had very rapid results with his communication as well as his improved walking. He was not able to walk well because of cerebral palsy.
His mother, Kerie Logan, wrote about his remarkable healing in her book “Affirming and Focusing on Living a better Life”: At the time he would walk a few feet and fall to his knees. He could not walk downstairs without someone holding his hand, and he could not jump or run. To my surprise and everyone else he started to gain his daredevil confidence. One day he was in the living room jumping off the couch. When he landed he did not fall on his knees. His balance was much better. I watched him do it over and over again. It was like a miracle had taken place right before my eyes.
Within two weeks he started to run around the house. I know it is a rule at the gym’s kids club to not allow the children to run, but the women were amazed to watch him run for the first time. They did not have the hearts to tell him to stop.
To be able to witness him being able to run with joy and excitement just makes my heart sing. Every time I am grateful that words cannot speak. The gift Mia den Haan gave me is what every parent would wish. It was a blessing and I am so thankful.
The next healing my son received was for his communication. When you have a child with autism, the communication barrier varies. My son is four and a half and could say words, but putting those words together to form a sentence was not easy for him. At times it felt like a guessing game and I had to learn to show objects of various foods to get a response from him.
Arlen ended up not getting any speech therapy as I received a letter stating that all the speech therapy services have been temporarily stopped before we even started.
However, a week after Arlen received his speech evaluation he received his first distant healing for his communication. Within a few days people saw his use of words expand and it still does to this day (December 2012)He was starting to say sentences like:
How are you?
What is your name?
I want to go home and snuggle with Mama.. and many more
Every day his use of words and sentences expands. Now I have to watch my own words because there have been times he will recall and repeat what I said.
I cannot help but smile with joy. I have not changed his diet or tried any new techniques. The average child can say the sentences Arlen now speaks at a much younger age, but an autistic child cannot.
I can now have a conversation with my son and to me that has been priceless. While it may be hard for some people to believe in my son’s amazing healing, but he did not get any speech therapy over the summer from preschool and no other resources were available.
Download: epub mobi (Kindle) pdf more Online Reader
rtf lrf pdb txt
Price: Free! USD
Add to Library
Create Widget
Tags: healing autism autism spectrum disorders cerebral palsy autism spectrum disorder healing therapies autism awareness autism in children healing the mind healing autism autism treatment healing energy autism help autism story autism therapies autism therapy autism recovery healing brain healing therapy autism cures
About Mia den Haan

I have helped people with many different issues such as relationship or work issues both at a mental, emotional as well as physical levels. However, my interest in helping children with Autism has grown since I began working with autistic clients and had surprisingly good results. Because of that I have increased my interest in Autism and the many different treatment options that are available and how best to approach Autism with the spiritual methods and tools I am familiar with.
I became aware of my spiritual gifts many years earlier after I “spontaneously” began receiving a series of premonitions in the mid 1980s not long after I had started a simple meditation practice on how to relax and center myself. That is when I decided to focus more on these gifts and tried to understand it better.
Not long after that I decided to become involved with Reiki. A succession of other spiritual and energy healing methods followed, such as Seichim healing, Zenna healing, Reconnective healing, Quantum healing and I also began working with several flower and shell essence ranges. It taught me that all can be healed or improved no matter how difficult or sometimes impossible this may seem from a human perspective.
I first began providing these spiritual healing sessions in the 1990s, often at night time, while during day time I was managing my own small information technology business.
Because more and more premonitions began to happen, I decided to publish some of these predictions such as earthquakes and planetary changes, including the imbalanced weather patterns we are currently experiencing, in a book titled “New Concepts for Business and Humanity”.
In 2002 after a major change from within I was “given” a new Soul healing process by “higher spiritual realities”. Since then this Soul healing process has been the only modality I use with my spiritual work.

Healing is a most blessed gift. Your story is amazing.

You have subscribed to alerts for Mia den Haan.

You have been added to Mia den Haan's favorite list.

You can also sign-up to receive email notifications whenever Mia den Haan releases a new book.