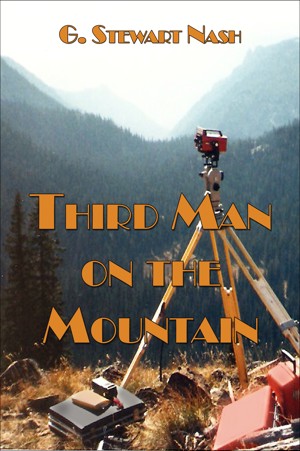 Third Man on the Mountain

By Stewart Nash
Phillip Thorton owns a survey company in the Colorado Rockies. He finds his hired help on a knoll, dead, suspecting a heart attack, learns he had a broken neck, begins an investigation which soon puts him in grave danger. He fights for his life on two occasions. Recruiting his rancher friend and hands, they deal with the killers. More
PHILLIP THORNTON is the owner of Triangle Surveys in Colorado. He advertises in a national surveyor magazine for an instrument operator.
CHUCK DAVIS, was hired out of Pennsylvania. He, MAUREEN and a young son move to Colorado. Chuck worked out well and performed necessary computations and drafting.
Philip and Chuck were working on a job in the mountains with their client, WESLEY GRAHAM, a wounded Vietnam war veteran, when the radio message to Chuck on the knoll a half mile away wasn’t answered. Thinking his radio batteries died, Phillip hurried back to the truck to take another radio up the hill. When he arrived, he found Chuck lying alongside the survey instrument. Phillip thought he may have suffered a heart attack and attempted to revive him, but to no avail. He radioed Wesley to go back to his survey truck and use the CB radio to phone the county sheriff. When the sheriff arrived, he examined Chuck carefully and concluded that he had probably had a heart attack and may have broken his neck from the fall he’d taken. He said he would request the corner to make a determination of cause of death.
While Philip had waited for the sheriff he noticed the survey transit was not pointed down toward where he had been earlier, and wondered about it. Completing the field work at the same location a few weeks later, Philip looked through the instrument telescope at what he thought Chuck might have been looking at, a fluttering covering over a large meadow, and wondered what would cause it. He also play acted as to how Chuck had fallen if looking in that direction, and concluded that something was wrong with how Chuck fell, and even how he died. Phillip decided to investigate the flutter in the meadow.
Dressed in camouflage with a sidearm and his brushing tool, he discovered a huge marijuana patch with a camouflage covering raised over the crop. He also discovered guards stationed periodically around the perimeter. He found their buildings, well hidden beneath the forest canopy. Sneaking up to different windows for a peek, Phillip checked out different rooms and saw a laboratory with a few men dressed in lab coats and knew there was more than marijuana here. On his way back a guard came from behind and a fight ensued, resulting in a nearly severed hand of the guard by Phillip’s brushing tool. Rather than bleed to death, the guard answered questions that implicated his boss, JOCKO, in the murder of the surveyor, and a wealthy client of Philips as the money behind the venture.
Returning home, Philip made phone calls to determine the legal property owner, his client. He also suspected that the client likely involved an attorney. His later questioning of the client produced a threat he could not ignore, and for safety, he sent his wife off to visit their son out of state. Meanwhile, Jocko questioned the wounded guard and learned the identity of the perpetrator, the surveyor working in the area. Jocko went after Phillip and caught him at his home, questioning and threatening him. Phillip managed to escape and went for help to a cattleman friend in the next county. A plan was formulated to notify authorities, but to take the initiative on their own with several mounted ranch hands to destroy the marijuana crops and shut down the operation.
Federal authorities were given directions to meet up with the cowhands on the mountain well before daylight, but the authorities could not keep up with the horse mounted men, each with a small handheld radio, a weapon, and stout lariats. By the time the authorities arrived on the scene, the marijuana crop had been destroyed, and the unsuspecting guards hogtied. Arrests were made at the site, coordinated with arrests of the money man and his attorney. The third man on the mountain who murdered Chuck Davis lay deep beneath the waters of Blue Mesa Reservoir, and the untimely death of Chuck was vindicated.

Mr. Nash is a professional land surveyor and has worked in most western states and B.C. Canada. His additional outdoor activities includes: hunting, fishing, hiking, and gold prospecting, all of which have given him a unique perspective when writing stories taking place in the wilds. He has one such book published in B.C. Canada, a bestseller in 2001, The Last 300 Miles, now available on e-books under G. Stewart Nash. He also has a recently published biography of a northwest 1853 railroad exploration and a 1858-62 military road construction across the Rocky Mountains, titled, John Mullan - Soldier, Explorer, Road Builder, found on Amazon. In also has several e-books on Amazon under Stewart Nash.
He truly enjoys the research involved in his works, which are mostly historical fiction filled with action and adventure. However, to qualify his book titled, Who Is - Jesus Christ, Stewart has been a biblical student for many years and served in churches as a deacon, a message presenter, and Sunday School teacher.
He lives with his wife Sandy, for 32 years, and together they have six children, 13 grandchildren and four great-grandchildren.
In 2017 he and Sandy had moved to northern British Columbia, Canada, to be closer to both of their immediate relatives. Nash currently has a few different books available on amazon.com,

You have subscribed to alerts for Stewart Nash.

You have been added to Stewart Nash's favorite list.

You can also sign-up to receive email notifications whenever Stewart Nash releases a new book.