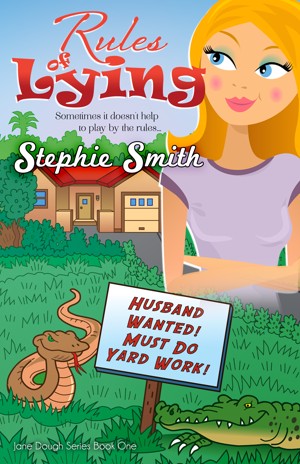 By Stephie Smith
Rated 5.00/5 based on 1 review
In this 1st Place award-winning humorous chick-lit mystery, a former best-selling romance writer tries to pick up the pieces of her life after getting her heart stomped on by her lying, cheating boyfriend, and returns to her hometown in Florida where she contends with family, reporters, hurricanes, wildlife, a hunky Texan cowboy, a drop-dead gorgeous doctor … and murder. More
"Readers who enjoy fun and randy mysteries about being caught in the bumbling world of love will greatly enjoy Stephie Smith's Rules of Lying. Jane Dough is a charmer."***** FIVE STARS! - Chanticleer Book Reviews (1st Place Winner for the Chanticleer Mystery & Mayhem Awards, Humorous category!)

In this 1st Place award-winning humorous chick-lit mystery, a former best-selling romance writer tries to pick up the pieces of her life after getting her heart stomped on by her lying, cheating boyfriend, and returns to her hometown in Florida where she contends with family, reporters, hurricanes, wildlife, a hunky Texan cowboy, a drop-dead gorgeous doctor … and murder.

What readers are saying about Rules of Lying:

“Absolutely, unequivocally LOVED it … Had me laughing uncontrollably and reading out loud to my co-workers.”

“This book had it all–humor, mystery, suspense, and romance. I can’t wait to read the next book in this series.”

“I couldn’t stop reading on the IPad, it was hilarious. I really enjoyed this writer. She is up there with the top notch best sellers. I can hardly wait to read more from this author. She gives Janet Evanovich some good competition.”

“This book made me laugh, it made me dream, it made me cry (just a little) and made me take a look at myself. A little bit mystery, a little bit romance, a little bit chic-lit, Rules of Lying is a lot of entertainment.”
Available ebook formats: epub
Price: $3.99 USD
Buy Add to Library Give as a Gift
How gifting works
Create Widget
Tags: romantic comedy womens fiction cozy mystery light romance mystery and humor humorous chick lit wacky dysfunctional family
About Stephie Smith

Stephie Smith was born in Parkersburg, West Virginia, the fifth of six girls. Early years were spent making mischief and, in general, driving her parents crazy while the family migrated between Ohio, West Virginia, and Florida. In fact, her family moved so often--18 times before Stephie finished sixth grade--that some people suspected they were running from the law.

Stephie left home at 14, finished high school at 16, and enlisted in the Air Force at 18, graduating with honors from the USAF Schools of Electronics and Instrumentation. After attending several colleges and universities around the country (switching majors from Chemistry to Art to English to Psychology but never figuring out what she wanted to be when she grew up), she followed her sisters to east central Florida and settled there. She remains there today writing historical romance, humorous women's fiction, and computer how-to books. You can contact her through her website StephieSmith.com. She loves to hear from readers.

Reviews of Rules of Lying by Stephie Smith

Loved, loved this book! Her writing and main character remind me of Janet Evanovich, and her character Stephanie Plum. This main character, Jane D-O-U-G-H thought and acted like I would in situations. The writing was excellent, characters developed well, humor was spot-on in Jane's thoughts and words, romance was great. I was moved to tears at one point (actually posted in Facebook about it!), because I recognized myself and a yearning I have that Jane expressed. Immediately went looking for sequel when I finished this book. Two thumbs up!

You have subscribed to alerts for Stephie Smith.

You have been added to Stephie Smith's favorite list.

You can also sign-up to receive email notifications whenever Stephie Smith releases a new book.