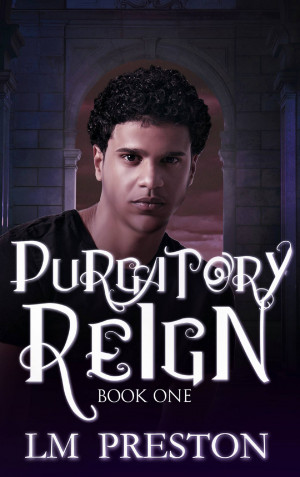 By LM Preston
Rated 4.50/5 based on 4 reviews
Peter Saints’ life stinks. But things are about to get much worse. First, his parents are murdered in front of him. Then another victim dies in his arms.

Visions plague Peter with warnings that something wants him for a sinister cause. It desires the one thing that Peter refuses to give—his blood. Peter carries within him the one gift or curse that could unlock a secret to destroy the human rac More
Peter Saints’ life stinks. But things are about to get much worse. First, his parents are murdered in front of him. Then another victim dies in his arms.

Visions plague Peter with warnings that something wants him for a sinister cause. It desires the one thing that Peter refuses to give—his blood. Peter carries within him the one gift or curse that could unlock a secret to destroy the human race.

On the run with Angel, a scruffy kid, Peter starts to unravel the mystery. It’s the one treasure the heavens sought to hide from the world. Unfortunately, when Peter finds the answer he hopes that will save the girl he loves, he opens the door to a great evil that happens to be salivating to meet him.
Available ebook formats: epub mobi pdf lrf pdb txt html
First 15% Sample: epub mobi (Kindle) lrf more Online Reader
pdb
Price: $3.99 USD
Buy Add to Library Give as a Gift
How gifting works
Create Widget
Tags: romance paranormal young adult ya
About LM Preston

LM. Preston was born and raised in Washington, DC. An avid reader, she loved to create poetry and short-stories as a young girl. With a thirst for knowledge she attended college at Bowie State University, and worked in the IT field as a Techie and Educator for over sixteen years. She started writing science fiction under the encouragement of her husband who was a Sci-Fi buff and her four kids. Her first published novel, Explorer X - Alpha was the beginning of her obsessive desire to write and create stories of young people who overcome unbelievable odds. She loves to write while on the porch watching her kids play or when she is traveling, which is another passion that encouraged her writing.

While paranormal is not a genre I usually read, I enjoyed this book. Purgatory Reign took me on an exciting and satisfying ride. It starts with a jolt that leaves orphaned Peter Saints wondering why the people around him have to die. Then his guardian advises him to go on the run. Racing through the pages, we learn along with Peter what forces are driving these events. He recognises that he must discover his own powers in order to protect the woman he has come to love. Secrets are unearthed and mysteries revealed at a pace that leaves the reader wanting more, right up to the last page.

The world of Purgatory Reign is both complex and consistent, making it completely believable. Peter himself and the other characters come alive as they rise to the monstrous challenge they face, a challenge Peter for one never expected, making him revise his ideas about the world, his parents and himself. His adventures as he pursues his quest make this coming-of-age story a thrill to read.

Disclosure of Material Connection: I received a digital copy of this book free from the author. I was not required to write a positive review. The opinions I have expressed are my own.

When I agreed to read this book I knew nothing about it. I literally gave the synopsis a quick peek but I didn't really take it in. Can I just say that this has to be my most favourite way to read books, I seem to find the best books this way.

Preston's world building is fantastic and it draws you in from the first page, I seriously struggled to put this book down and when I had to put it down I struggled to keep my mind off it. Once this book starts up the action doesn't stop until the very end.

Peter is understandably confused when his guardian Pastor Finn sends him on the run after Hanna's death, he has no idea who he is running from or where he is running to. Peter believes that anyone who gets too close to him will also die, but he doesn't understand why. He just tries to keep people away from him. Until he meets Angel. While searching for the answers to his questions Peter makes a few friends, friends who will save his life, give him purpose and stop him from feeling alone in the world. And unlike in plenty of other books it isn't an insta-friendship. These friendships take building, take earning of trust and is believable.

The book built towards this big climax which seemed to be over really quickly, almost too quickly really. So I re-read it. Only to find that I had in actual fact skimmed some of it to find out what happened next as it was so gripping.

I received an ARC of this book in exchange for an honest review.

I'm not sure where to begin! I adored this book! It had everything I look for! I was blessed to be given an ARC copy for review, and I have to say, it makes me a bit sad that a lot of people couldn't read this book yet. Yes! It was that good!

When a girl dies in his arms, Peter Saints's life is really thrown through a loop. He is immediately sent on a journey that seems a bit impossible, but he is strong and determined.

Peter might be young, but he has a past that makes him seem so much older. People seem to die all around him, and like anyone else would, he fully blames himself for it. He's a bit jaded and can be a bit of a jerk at times, but you know what? I probably would be too if I were in his shoes. The best way to keep people from falling into the death trap that seems to surround you would be to scare them the heck away! The important thing is that we always know that underneath all the anger, fear, and pain, he is a great guy and a fascinating character.

Along the way, he meets a few friends, and many, MANY foes. His friends, while weak in some ways, have definite strengths, both in their actions in the book and as characters from a reader's standpoint. They are realistic enough that I could even see pieces of them in my own friends. They pull him through even though toughest scrapes. Most importantly, they both teach him things about himself and everything around him. When I pick up a book of any kind, I'm all about the life lessons! I look for these! I truly enjoyed the development of Peter's character once his friends were brought into the picture.

The world that LM Preston created is terrifying! Why? Because it's just like ours. I'm probably going to be looking at people a bit funny for a week, wondering if there's a creepy demon riding on their shoulders.

I particularly enjoyed learning about the secret societies. They were well-thought out and well-rounded. I was given enough information to not be completely lost, but not so much that I'm not genuinely curious. I finished the book hours ago, and I already want to know more.

I truly enjoyed this story. It has everything. Action that kept me on the edge of my seat, love that I found believably flawed and yet beautiful at the same time, loss that really tore at my heart, lessons that keep me thinking after I put it down, friendships that only added to the character development, and tons of intriguing paranormal story line woven in to keep me wanting more. I seriously can't wait until the next one! The wait is going to be torture!

Peter was orphaned when his family was murdered. He lives in an orphanage run by an ex-cop named Pastor Finn. Peter sneaks out whenever possible even though he has been strictly forbidden from leaving the grounds. On one such excursion, Peter is running from a homeless girl that he gave money to once. When she is hit by a car and transfers something to him, his adventure begins. Pastor Finn quickly gets him out of the orphanage and tells him to find a sanctuary where he will be protected and hidden, trust no one, there are people after him. Peter doesn't understand what is going on, but he does what the Pastor says anyways. On his journey he picks up a stray kid named Angel against his better judgement. Somehow he feels like he is supposed to protect him. They get to a sanctuary and get some info, discover some secrets, and find out they need to leave and find another. There is a society of good and one of bad. The bad is run by a man named Gavin who works for The Master. They are slowly killing off the other group and using their children's blood for evil purposes. What the Master really wants is Peter's blood, Peter is special, his blood is the key to everything. Along his journey, Peter will discover things about himself and Angel that will shock him to the core. He will have to make a decision, does the good of one outweigh the good of many? What lengths will he go to to protect the ones he loves? This book is a definite must read. Crazy twists and turns and nonstop action.

You have subscribed to alerts for LM Preston.

You have been added to LM Preston's favorite list.

You can also sign-up to receive email notifications whenever LM Preston releases a new book.