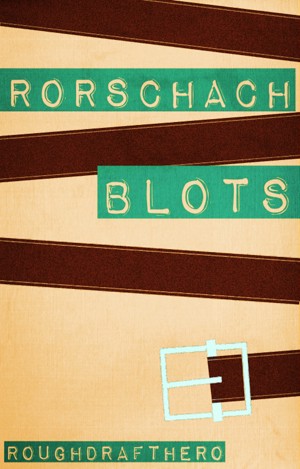 By RoughDraftHero
Rated 4.86/5 based on 7 reviews
Sev won't go back to the swim team. Sev won't accept his best friend's girlfriend. He will sit behind the art classroom and smoke his joint.

Reviews of Rorschach Blots by RoughDraftHero

I'm still halfway from finishing this book but so far it's good.

This was very good! I thoroughly enjoyed it

(reviewed 21 days after purchase)
Holly Bartlett reviewed on Jan. 18, 2021
(no rating)
the kind of story that still comes back into my mind even months after reading. Back when i was reading it, when i wasn't it was in the forefront of my mind. so well done, so emotional and angsty and unique. loved it.

Fantastic book from beginning to end.

One of my favorites!

I was wary starting this. I'll just admit it, I'm always a little suspicious of any author who chooses not to write under a name, even a pseudonym. So, RoughDraftHero had me quirking an eyebrow. It's ridiculous, but true.

This book also was not anything like I expected. I went in expecting a little slap and tickle, some rough, dirty spanking and smutty talk, combined with a dash of psuedo-pedo titillation (high-school student). I couldn't have predicted a character as heartfelt and earnest (if a little unstable) as Sev.

Plus, I generally avoid teenaged main characters. I'm in my mid-thirties. I just no longer relate to a lot of the common agnsty, sex-is-such-a-massive-big-deal issues common in teenage-centered plots. In fact, I generally find them really off-putting. It also became apparent early on that the text could do with a little more editing.

I 100% adored Sev and his obsessive floundering. As Caleb says at one point, how could you hate someone who tries so hard? I could just stop right there, I liked Sev so much. He was just so darned cute. I just want to scoop him up and nibble on him in a slightly inappropriate, but also somewhat motherish fashion.

I also liked Caleb. He's as flustered and lost as Sev, just in a different way. I found his attempt to do the right thing by his student believable and his particular kink hot (even if the sex is never very explicit).

In fact, the lack of sex, oddly, is part of what made the whole thing so endearing. Sev doesn't make the connection between what he's feeling and sexual arousal until 60% into the book. This means that a lot of obvious opportunities to insert gratuitous sex or masterbation scenes is judiciously skipped over on the authors part, allowing the reader to focus less on the lascivious and more on the intrepid relationship.

I did think that the ending came a bit abruptly and the tacked-on epilogue felt a little forced. But I am more than pleased with and surprised by this book. Kinda wishing I could read it again.

Wow, he got it. He absolutely GETS it. And the best part is the writer understands how to communicate Dominance/submission and spanking and learning how to do both. He knows how to explain things so you're right in the middle of the learning curve. And it's a long troubling curve, but what a RIDE!

You have subscribed to alerts for RoughDraftHero.

You can also sign-up to receive email notifications whenever RoughDraftHero releases a new book.