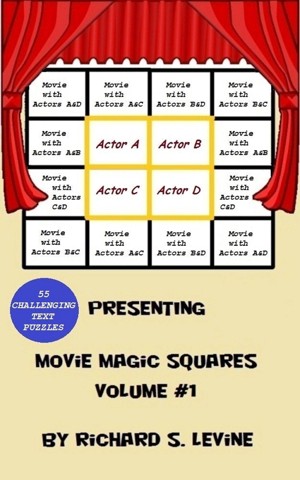 By Richard S. Levine
Richard S. Levine has been making games for over 30 years. Movie Magic Squares: Volume 1 contains 55 challenging movie-related text puzzles. Actors in each row/column/diagonal acted (or voiced or had an uncredited appearance) in the corresponding movies together. Actor hints are provided, and you don't need to know every movie. Answers give links to online movie databases (some movies rated R). More
Movie Magic Squares: Volume 1 contains 55 challenging movie-related text puzzles. Since you do not type in answers in this e-book, scratch paper might be needed as you work through a solution. In each Movie Magic Square, given the names of 6 movies (theatrical, TV, video, or animated), you are asked to determine the 4 actors who are missing from the puzzle.

Movie Magic Squares puzzles work a bit like mathematical magic squares. Instead of rows, columns, and diagonals that add up to the same total, the actors in each row, column, and diagonal acted (or voiced or had an uncredited appearance) in the corresponding movies together.

Hints are provided, and answers contain links to online movie databases. Using the hint for the puzzle, you can often figure out the solution if you know at least one or two of the movies and actors. If you can solve a Movie Magic Square puzzle without a hint, you are a movie knowledge virtuoso.

Richard S. Levine has been designing and making games for over 30 years. He and his wife love to watch movies and make up entertainment games. This is his first puzzle book, and he has more in the works.

Richard S. Levine has been a math teacher, a software engineer, and a video games designer. Now he's busy writing speculative fiction. He has had stories published in Emerald Tales, OG's Speculative Fiction, Raygun Revival, The Fifth Di, The Lorelei Signal, and other online and print magazines. "A Comic on Phobos" received a nomination for Samsdotpublishing's James award. To learn more about Mr. Levine's writings and his award winning classic video game, "Microsurgeon", please visit his website. You can also check out my interests on Pinterest at pinterest.com/ricklev/.

You have subscribed to alerts for Richard S. Levine.

You have been added to Richard S. Levine's favorite list.

You can also sign-up to receive email notifications whenever Richard S. Levine releases a new book.