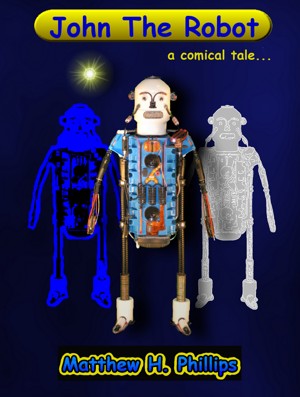 John The Robot, a comical tale...

Everything seems to be going smoothly, a rarity for this duo to be sure; however, just when Ithan is about to put his feet up and take a much needed break, the space police are on his ship’s fumes and desperate to take him in for whatever laws Ithan has broken on this voyage. It will take much patience and extreme piloting skills to avoid his arch nemesis, the captain of the space police ship following Bessy. Yet, Ithan will have to endure one creature and his constant and not very charming complaints to a level not reached---since their last trip. If the space police don’t capture Ithan, his trusty and loyal robot may just send him over the brink of sanity. Can one space going vessel be big enough for Ithan Higgins and John the Robot?
Available ebook formats: epub mobi pdf rtf lrf pdb txt html
First 15% Sample: epub mobi (Kindle) lrf more Online Reader
pdb
Price: $0.99 USD
Buy Add to Library Give as a Gift
How gifting works
Create Widget
Tags: robot comedy humor journey pilot action adventure computer engineer chase space ship interstellar voyage freighter vessel odd couple bessy ithan
About Matthew Phillips

Writing has always been an important outlet for this individual sporting several avenues of creativity. Before he attempted to toot his first note on the flute, Matthew had actually penned his first story while in first grade. Unfortunately, the tale of a kind snake has been lost to time, but its impact on the young boy would never be forgotten. During his fourth grade studies, Matthew began flute lessons at Cynwyd Elementary School. As the years passed, Matthew would begin to find moderate success as a general studies student and as a budding musician. In Middle School after the main concert cycle had just been completed, the teacher in charge of the music program allowed Matthew H. Phillips and several other students the opportunity to conduct the ensemble. It was educational candy for this particular musician.

By his High School days, Mr. Phillips was leading the school orchestra in concerts across the Delaware Valley to much aplomb. Regular school studies and his continuation with his music endeavors kept the growing rennasaince man busy through his high school days. Here and there, Matthew would write short stories either for a school project or for his own personal enjoyment. During these days, Matthew H. Phillips was looking forward to a career in music perhaps as a conductor or composer, but not as a writer.

In his senior year in high school, Matthew began to write long tales to be used as thematic material for Symphonic Poems (his chosen and preferred form of orchestral writing). Since that time and continuing through to the present, Matthew H. Phillips has always fused his music composition desires with his creative writing efforts. It was also in his last year of high school that Matthew began to take private music composition lessons with local composer Harold Boatright. Dr. Boatright was a prominent composer and teacher in the Philadelphia area who also added elements of general learning when teaching music. Because of his private music studies, Matthew was allowed to pass out of several required music classes when he entered college.

While completing his studies at the Esther Boyer College of Music, Matthew concentrated on writing music works that were not thematic based. It was during these years that some ideas for stories began to percolate in the young man’s mind. After graduation from Temple University, Matthew H. Phillips completed a large format concerto for voice and then found himself aching to write a large symphonic poem. He came up with a story and began to write the orchestral work as he penned the written text. Once finished, several years had passed since his college days and a new work took over his interest.

After leaving college, Matthew H. Phillips had formed his first playing ensemble called The Bala Cynwyd Symphony Orchestra. While leading this orchestra, he had only limited time to forge new music compositions and the written text that formed the creative motivation for the work. Over the next few years music and writing went hand and hand for the young artist. The conclusion of his tenure with the BCSO led to more free time and a desire to write a large scale epic tale which would serve as thematic material for a symphonic poem. More than two years of writing led to the New Frontier’s Saga for which Matthew would sketch and orchestrate an orchestral work of the same name.

During the early 1990s Matthew had several orchestral compact discs released to a worldwide market. By the end of the 20th Century the conductor had crossed over to concert band endeavors which led to three more commercial CDs. It was at this time in his music career that he undertook writing a sequel to New Frontiers and a completely different story about a mysterious detective. No written music was put down in his sketch book, but the second effort led to both a complete sketch rendering of the music as well as a written text of the extant story. A major catastrophe would halt all his productions and have him take stock of what and why he was composing and writing.

Matthew halted work on the sequel to the epic tale, New Frontiers and he put aside the sketches for his next symphonic poem. The decision was made to concentrate on writing several wind ensemble works for the new band he was now music director and conductor. Over the next six years he would lead the Marple Newtown Community Band to rave reviews and even had a work or two performed by the group. During the Marple years, Mr. Phillips would write a wind ensemble composition which would eventually have written text penned to its subject matter. Placing some weight on forging his career as a bandmaster, the steadfast march conductor wrote many articles for band newsletters and magazines.

It was a tough decision, yet the able bodied conductor left his position as band master of the Marple Newtown Community Band to concentrate on his writing efforts in 2006. He wrote the story to and composed the large scale orchestral work entitled the Lost Scroll. Though he planned on writing more orchestral works, in the summer of 2007, he was hospitalized with a stomach ailment and that put the brakes on several writing works for which he was then concentrating on. After a short curative time, Matthew completed several short stories and looked forward to writing a new epic tale.

Taking over six years of thought, sketching, writing and editing, Matthew H. Phillips completed his large epic tale entitled Newrael: Unavoidable Detour. Years earlier, he had written a wind ensemble work which was the inspiration for thematic material contained in one section of the newly written book. This story would be his first e-published product available from Amazon.com. Plans as of 2012 were to write his next action-adventure novel concerning a mid-size town detective and his efforts to stop a madman from taking over the world.

Reviews of John The Robot, a comical tale... by Matthew Phillips

You have subscribed to Smashwords Alerts new release notifications for Matthew Phillips.

You have been added to Matthew Phillips's favorite list.

You can also sign-up to receive email notifications whenever Matthew Phillips releases a new book.