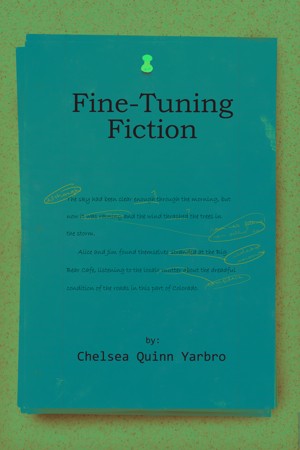 By Chelsea Quinn Yarbro
Acclaimed, best selling author, Chelsea Quinn Yarbro guides you effortlessly through the trials and tribulations of creating your own best-selling work. More
Fine-Tuning Fiction began as a two-part writing seminar, each five hours long, at the Writers Connection in Cupertino, California. They were a popular duo, receiving high marks from those who took the seminars --- often more than once for each --- and were repeated regularly for three years. After the Writers Connection stopped giving seminars, award-winning novelist Chelsea Quinn Yarbro was often asked by those who had taken the courses, for copies of the various exercises in Part 2, or notes from the material in Part 1. This workbook is the result, and it combines both the lecture and the lab portions of both seminars. As Yarbro told those taking the seminars, "I don't want you to write more like me, I want you to write more like you."

A professional writer for more than forty years, Yarbro has sold over eighty books, more than seventy works of short fiction, and more than three dozen essays, introductions, and reviews. She also composes serious music. Her first professional writing – in 1961-2 – was as a playwright for a now long-defunct children’s theater company. By the mid-60s she had switched to writing stories and hasn’t stopped yet.

After leaving college in 1963 and until she became a full-time writer in 1970, she worked as a demographic cartographer, and still often drafts maps for her books, and occasionally for the books of other writers.

She has a large reference library with books on a wide range of subjects, everything from food and fashion to weapons and trade routes to religion and law. She is constantly adding to it as part of her on-going fascination with history and culture; she reads incessantly, searching for interesting people and places that might provide fodder for stories.

In 1997 the Transylvanian Society of Dracula bestowed a literary knighthood on Yarbro, and in 2003 the World Horror Association presented her with a Grand Master award. In 2006 the International Horror Guild enrolled her among their Living Legends, the first woman to be so honored; the Horror Writers Association gave her a Life Achievement Award in 2009.

A skeptical occultist for forty years, she has studied everything from alchemy to zoomancy, and in the late 1970s worked occasionally as a professional tarot card reader and palmist at the Magic Cellar in San Francisco.

She has two domestic accomplishments: she is a good cook and an experienced seamstress. The rest is catch-as-catch-can.

Divorced, she lives in the San Francisco Bay Area – with two cats: the irrepressible Butterscotch and Crumpet, the Gang of Two. When not busy writing, she enjoys the symphony or opera.

You have subscribed to alerts for Chelsea Quinn Yarbro.

You have been added to Chelsea Quinn Yarbro's favorite list.

You can also sign-up to receive email notifications whenever Chelsea Quinn Yarbro releases a new book.