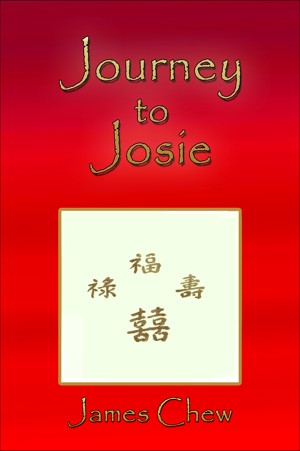 By James Chew
A Chinese-American adopts a child from China and, along the way, addresses some long-buried issues from being raised in a small California town where his family was the sole Chinese family. More
This is a book for those contemplating foreign adoption. Written from the unique perspective of a Chinese-Amercian struggling to be "American" while growing up in a small California town, this experience helped him address some deep rooted issues from being the sole Chinese family in this small town during his "Wonder" years. There is no “Dummies Guide To Chinese American Adoption,” and the author make no claims of this to be one. He does know that before and after one decide to go through this process, you will feel alone. By sharing his and his family's journey, where they kept our eyes on the prize and maintained a sense of humor, this book might be a good companion help those going through the foreign adoption process make it through.

James S.B. Chew has twenty-nine years of experience in the aerospace, automotive, and education fields.

Mr. Chew’s auto industry accomplishments include developing the first global “enthusiast/youth tuner” battery, known as the Orbital in North America and Maxxima in Europe, developing and leading the execution of General Motor’s youth enthusiast program, known as “American Tuner”, and contributing to the development and execution of the Dodge Strategic Marketing and Product plans that created “The New Dodge”. Mr. Chew is an active automotive journalist, writing under the “J.C. Chaney, Jr”, “M.J. Yue”, and “James Chew”, and is a member of the Motor Press Guild. He currently contributes to the Antelope Valley Press (CA), AV News Today, Whispering Bomb, der Bayerschein, and “Roundel” the magazine for the BMW Car Club of America.

As the T/J Technologies COO, Mr. Chew refocused the company to its competency of developing new materials for advanced electrochemistry applications. This successful execution, resulting in an annual sales increase of $2.5M to $25M, was recognized by Crain’s Business Daily as one of Michigan’s “20 Largest Technology-based Companies” and with T/J being named as one of “50 Michigan Companies to Watch” by the Michigan Small Business Association. Mr. Chew completed the successfully merging of operations between T/J Technologies and A123 Systems (Nasdaq:AONE), creating the world’s largest developer of advanced lithium-ion battery materials and systems. At ATK, Mr. Chew developed and executed the corporate Science and Technology strategy, transforming ATK from a commodity weapons supplier to a leader in the Space and Defense systems market. At SAIC, Mr. Chew pioneered the concept of using commercial satelittes to host DoD payloads to affordably meet the DoD Space mission and Needs. At L-3, Mr. Chew successfully developed and executed the business development campaign for the first RF waveform technology for both commercial and military applications.

Mr. Chew earned a lifetime California State Community College teaching credential in engineering. He earned his Bachelor of Science degree in Mechanical Engineering from the California State Polytechnic University, Pomona and a Master of Science degree in Systems Management from the University of Southern California. Mr, Chew is a graduate of the Stanford Executive Engineering Program and the Defense Systems Management College Advanced Program Management Program. He is a DoD Level 3 certified acquisition professional and a DoD Level 3 System, Planning, Development, Research and Engineering professional. He was recognized as the 2009 College of Engineering Distinguished Alumnus by his undergraduate alma mater.

Chew served on the board of ABAKAN, Inc., and the National Academy of Science (NAS) Science, Technology, Engineering, and Mathematics (STEM) study panel and is the Chairman of the NDIA Science, Engineering and Technology Division.

Mr. Chew is married to the former Michele Farren, of Philadelphia, PA. They have two daughters, Madeleine and Josephine.

You have subscribed to alerts for James Chew.

You have been added to James Chew's favorite list.

You can also sign-up to receive email notifications whenever James Chew releases a new book.