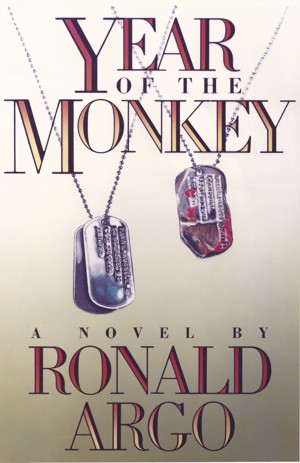 Year of the Monkey

Hailed as one of the most important novels about Vietnam, Year of the Monkey is a wartime mystery and a thriller about friendship and betrayal set during the decisive Tet offensive of 1968. From the front line to the rear echelon, Ron Argo takes us on a perilous journey through a war we only thought we knew. More
Acclaimed as one of the most important novels of the Vietnam War, Year of the Monkey takes us not only into the savage jungles where death waits in every paddyfield, but into the apocalyptic world of political corruption, where friendship and betrayal become unavoidable, where murder and love are as common as body counts. It is the gripping story of two American soldiers trapped in a sinister web of cold-blooded murder during the shattering Tet Offensive of 1968.
In the poisoned soul of Saigon, Russ Payne is an army journalist partying his nights away when a wild grunt named Willingham is lobbed into his life like a grenade. Willingham, the lone survivor of a Special Forces squad, has been reassigned, inexplicably, to Payne's cushy rear unit. Suddenly Payne's fragile peace is shattered when he's forced to spy on his new friend as part of a secret CIA investigation. On a mind-bending odyssey into the depths of the war-torn jungle, he follows Willingham in his bloody quest to avenge the massacre of his former unit--and discovers a hell of his own.
Cutting through an apocalyptic jungle of intrigue, Payne falls in love with a woman who welcomes him into the fold of a Viet Cong camp, witnesses the death of his childhood friend, discovers the horrific meaning of attrition ... and ultimately leads to him committing a crime beyond redemption.
In stunning scenes of combat and intrigue, we glean as in no other novel or movie the patch-quilt nature of the Vietnamese people and the murderous deceit of sinister body count politics.
In the year of the monkey, Payne will come to understand the terrible consequences of following orders—and of ignoring them.
Available ebook formats: epub mobi pdf lrf pdb txt html
First 10% Sample: epub mobi (Kindle) lrf more Online Reader
pdb
Price: $5.99 USD
Buy Add to Library Give as a Gift
How gifting works
Create Widget
Tags: thriller war crimes love and war mysterysuspese historical fic vietnam 1968 politics 1960s moral betrayal
About Ron Argo

Ron Argo has been a psych-ward aide, a photographer, a Florida Keys boat captain, an award-winning newspaper reporter, a combat correspondent in LBJ's war, a plumber, carpenter, electrician, all-around jack and restorer of old houses, a would-be musician and artist who can no longer play a guitar with the arthritis. He holds three degrees to include journalism, literature and the MFA; he's gone to jail a time or two in his reckless youth but never had to post bail, been a voter in all elections, except when in Vietnam where the thought was ludicrous. He was never a bartender or preacher. Nor did he ever hold political office, if you don't count chairing a citizen's committee appointed by a board of supervisors to fight corruption over animals, and whose prize-winning newspaper series on that subject helped created the first low-cost spay and neuter clinics in a Southern California city.
He has published one of the more important American war novels of the last century, an epic that one acclaimed critic/academic compared to the works of Mailer, Dos Passos, Jones and Crane.
Argo's only been married twice, so he has no pressing momentum for pumping out promoting book after book, as some novelists must to do to support ex spouses, etc. He has a working, caring wife to assure his maintenance and thus survival.
He is however the author of these fine, award-winning historical and thriller novels, Year of the Monkey, Baby Love, The Courage to Kill and The Sum of His Worth. Other works are in his head and perhaps going down on paper soon as he picks himself up and gets back in the game.
Argo and spouse Mary--children having flown the nest--live in a small and snug community in San Diego where, like Voltaire, he's been there, learned some lessons and now tends his garden.

Reviews of Year of the Monkey by Ron Argo

You have subscribed to alerts for Ron Argo.

You have been added to Ron Argo's favorite list.

You can also sign-up to receive email notifications whenever Ron Argo releases a new book.