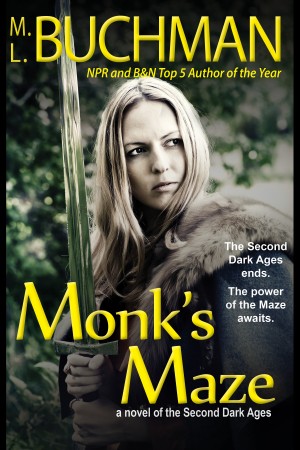 Meghan Taylor, “The Watcher of Iona.” A lone guardian on a distant Scottish island stands against the greatest evil mankind has ever known.

The Age of Technology died in a single cataclysmic night, shattering civilization and casting it into the Second Dark Ages. A two-century descent that only now moves toward the light.

A lone monk returns bearing a perilous legacy. He carries a terrible gift; a gift of power meant for a woman’s hands.

M. L. Buchman has over 40 novels in print. His military romantic suspense books have been named Barnes & Noble and NPR “Top 5 of the year.” He has appeared twice on Booklist's “Top 10 of the Year” both of which landed in their "Best 101 Romances of the last 10 years" list. He has been nominated for the Reviewer’s Choice Award for “Top 10 Romantic Suspense of 2014” by RT Book Reviews. In addition to romance, he also writes thrillers, fantasy, and science fiction.

In among his career as a corporate project manager he has: rebuilt and single-handed a fifty-foot sailboat, both flown and jumped out of airplanes, designed and built two houses, and bicycled solo around the world. He is now making his living as a full-time writer on the Oregon Coast with his beloved wife. He is constantly amazed at what you can do with a degree in Geophysics. You may keep up with his writing by subscribing to his newsletter at www.mlbuchman.com.

You have subscribed to alerts for M. L. Buchman.

You have been added to M. L. Buchman's favorite list.

You can also sign-up to receive email notifications whenever M. L. Buchman releases a new book.