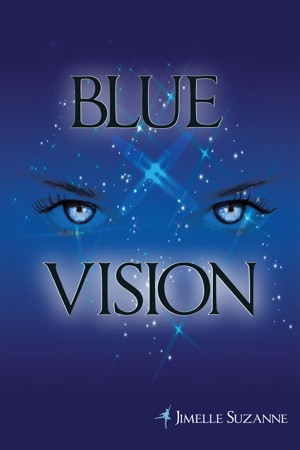 By Jimelle Suzanne
Rated 5.00/5 based on 1 reviews
BLUE VISION was written for readers who love spine tingling moments of déjà vu, esp and spirit communication, and includes romance, suspense and drama.

In an effort to heal from a violent love affair, a ballerina leaves California and moves to Charleston, SC. She hopes to find peace, but uncovers dark family secrets that catapult her into the ultimate understanding of where her future lies. More
Have you ever seen something that wasn't there?

Her adoptive parents were stunned when tiny Courtney babbled gaily about her 'other self' at an age when most toddlers were learning simple singular words like 'doggie' and 'kitty.'

Years passed and Courtney learned to keep slient about the flashes of blue light and the visions. She excelled in school and regularly attended ballet classes, quickly becoming an accomplished and sought after ballerina.

n her early twenties, she finds herself unsatisfied with her life and decides to go back to school, entering a UCLA masters program for counseling. She reasons that a career in psychology might unravel the mystery of her own psyche.

During a lavish dinner party at her parents' home in Palos Verdes, she meets a man with dark intension. While she'd spent much of her young life up until that point determined to ignore her gifts, for the first time in her life the neglect of her BLUE VISION proves nearly fatal.

Seeking safety and a place to heal, Courtney moves to Charleston, South Carolina in search of relief from the trauma and that ever-present sense that she's not yet discovered her true purpose.

With the help of a secret community of psychics and the wise old mystic, Hattie, Courtney begins to exlpore her gifts for the first time in her life.

On a casual shopping trip to Market Street, Courtney comes face to face with that elusive destiny in the form of a familiar young woman who's past is about to change everything Courtney has ever known to be true.

BLUE VISION is the first book in a series, journeying through the awakening conciuosness of one young woman, but it could be the story of anyone who feels the urgings of forces beyond our physical world.

Courtney's story embraces the plight of abused women and the souls who are lost in our overcrowded mental health system. Her destiny and vision carry her through the gauntlet of human experiences, from ancient lifetimes, through the present...and into the future.

If you felt a chilling tingle during THE SIXTH SENSE, or shed a tear with THE GHOST WHISPERER, this novel will delight and inspire you.

If you enjoyed the delicious cosmic justice enacted in MEDIUM, then BLUE VISION will satisfy every craving.

This is a page-turning read, packed with colorful characters, dramatic twists, and turns which lead to a surprising denouement; one that rings true in a world full of forces that remain beyond our full understanding.

Award winning ballet teacher and choreographer, Jimelle Suzanne began dancing at the age of seven and performed in her first ballet company at the age of twelve. At fourteen, she went on to join the Sacramento Ballet Company under the artistic direction of Dean and Barbara Crockett.

While in grammar school, she enjoyed story-telling and writing plays. She was the editor for the Roseville Union High School newspaper and wrote inspirational essays as librarian for Job's Daughters, a Masonic based organization for young women.

As a young adult, she performed for the Los Angeles Regional Opera Ballet Company. Jimelle formed her own dance studio in Roseville, California and later she created the Golden West Theater Ballet Company. There, she was responsible for the artistic content including music selection, costume design, choreography and production.

After becoming a homemaker and mother, she developed her own psychic abilities. Her psychic knowledge was increased through the study of Edgar Casey's work and books authored by Rudolph Steiner. During yoga meditations, Jimelle began having visions which led to the enhancement of her abilities.

In 1985, while living on Hilton Head Island, South Carolina, she facilitated group meditations and mediumship classes. In 1994, she created and published a meditation tape, The Rainbow is You, which was distributed by New Leaf.

For the past twenty years, Jimelle has been a ballet instructor, choreographer and professional psychic while making her home in Apex, North Carolina. She volunteered at the 1994 Maui Writers Conference to gain insight into story development through lectures by well known authors, agents and publicists.

Jimelle Suzanne's passion is to author the stories that come to her through her experiences and psychic abilities. She has written BLUE VISION, SILENT WHISPERS (available soon), and has begun work on the third book of the series.

I thoroughly enjoyed reading "Blue Vision". It has action, suspense, love, romance and a plot twist that I did not figure out until the end of the book. Usually, I deduce that something is coming or "who dun it" much earlier on. Jimelle Suzanne's writing is clear and easy to read. The characters are developed and relatable. Although there are references to the supernatural it is not a science fiction book. It is a book about life. I highly recommend this book.

You have subscribed to alerts for Jimelle Suzanne.

You have been added to Jimelle Suzanne's favorite list.

You can also sign-up to receive email notifications whenever Jimelle Suzanne releases a new book.