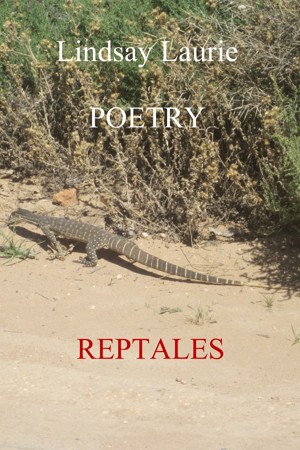 By Lindsay Laurie
poems to highlight our scaly friends who are never far away from us in their hiding places and inadvertently frighten the living daylights out of many of us if we happen to stumble across them enjoying their favoured pastime; sun-baking. More
i’m sure many readers who read this book have had at some stage in their life experienced that horrible feeling, depending on their personal fear of course, of coming into contact with a scaly creature ranging from the tiny skink right thro ugh to an enormous python that has left the hairs standing up on the back of the neck. the exposure is etched firmly into the mind forever as possibly one of the luckiest escapes in one’s life.

reptales has been written to acknowledge all these people who have over the period of my life-time sat down over a cup of tea or a beer around a campfire and when the subject of snakes, lizards, goannas etc. has arisen, have come forward with their weird but wonderful story of the narrow escape from the clutches of one of these dangerous scaly creatures, that they would have us awed listeners believe seek out humans just for the pleasure of frightening us half to death when in reality the poor creature would be quite content with not having any contact with us at all.

snakes in particular prefer to escape what normally becomes their tormentor and it is in some of these verses written that will show the contempt and stupidity that can occur when there is a preference to kill instead of the philosophy of ‘live and let live!’

in fact reptiles can become friendly and loveable pets, and in these modern times, many people have a friendly snake slithering around their lounge room and some have even come to the conclusion a snake is a wonderful preventative against car theft. a blue-tongue or a stumpy-tail make wonderful ornaments on an arm and readily accept a strawberry or piece of mince meat contentedly. maybe you the reader should consider a shiny friendly red-bellied black!

Born in the Royal Women’s Hospital in Melbourne in 1946 and as a child I lived at Deer Park before my family moved to Longwarry in West Gippsland. I have one brother who was born at the Warragul Hospital in 1948.

For forty-five years I lived at Longwarry, being educated at the Longwarry State School and the Drouin High School. I left school at sixteen and for thirty years worked in the dairy industry at Longwarry Milk Factory, employed by four company’s working as a butter maker, dryer operator and at times either a cream room or milk room operator. I never moved but the companies did. For four tomato seasons I worked for White Crow as an evaporator operator. Ill health with a muscle wasting disease forced me to retire eventually.

My sporting interests have always been Australian Rules football, Cricket and playing Basketball. I played all my football and cricket for Longwarry, but played basketball for a number of clubs.

My hobbies over the years have ranged from keeping aviary birds, especially finches, growing native fruit plants as well as attempting to grow everything I could from either seed or cuttings. I am one of the founding members of the modern and very successful Longwarry fishing club that in it’s first three years won a number of state trophies. My preference was river fishing for either blackfish or the Gippsland freshwater crayfish.

I also keep in constant touch with my brother Ron, who lives in Melbourne. He is a constant source of information toward my writing.

From 1993 until 2010 I lived in Irymple Victoria, and today, I am back in my home town Longwarry in Gippsland and because of my disability, I spend most of my time writing about the people in my life, and of course as you will read, fictional people who I do not wish to have in my life through this Creek family.

You have subscribed to alerts for Lindsay Laurie.

You have been added to Lindsay Laurie's favorite list.

You can also sign-up to receive email notifications whenever Lindsay Laurie releases a new book.