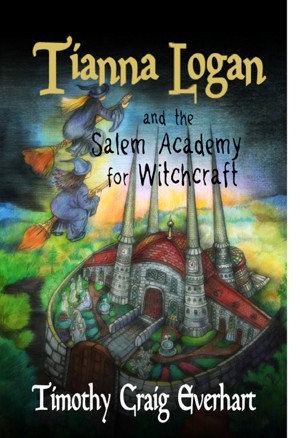 Tianna Logan and the Salem Academy for Witchcraft

America has its own school for young Witches and Wizards, the Salem Academy for Witchcraft. Inside the sleepy little town of Salem Massachusetts, there's a certain alley where the end is really a gateway to another world, a magical realm full of mystical creatures and beings of all descriptions. Inside this magical world is the best school for witches and wizards in america. Some consider it to be the best school for witchcraft and wizardry in the entire world. They teach the young witches and wizards how to master their budding magical abilities and get control of the accidental magic that's happening to them anyway.

I was raised in a playful environment that fostered imagination and I had a very rich imaginary life. I created all of these fantasy worlds and spent hour after hour for days on end playing in them. My family didn’t have a lot of money when I was growing up and there wasn’t so much stuff to buy then even for the ones that did, so my imagination was my main resource.

Everything is so very commercialized today, most kids can’t seem to play without all of the high tech toys, video games and computers. I feel that this is the great tragedy of our time. The kids of today are robbed in a sense that they are not given that opportunity to develop their imaginations in the way we did. When I was young we had AM radios and black and white TV’s that got only three channels, none of which had anything on them for a kid to watch except of Saturday mornings. Therefore we had to create our own games, toys, even our own worlds to play in, our imagination was king.

Once I discovered the world of books, that opened up new avenues for me. Books enabled me to use the author’s imagination to stimulate my own and therefore create even more fantasy worlds to explore and have my mental adventures in. By now it seems that I have always been around books. My parents believed in reading, mom had me reading when most of my friends were just learning their ABC’s. When I started formal school in the first grade she had me reading on a third grade level. By then I was thoroughly hooked and I can’t remember a time since then that I wasn’t in the middle of a book.

From the time I turned eight I was already making up my own stories and putting them down on paper. I always knew that I wanted to be an author and I did manage to get a few short stories published while I was still young. But back in the sixties and early seventies it was impossible to get a novel published without an agent and nearly impossible to get an agent. Then, when I was sixteen I made one of the more stupid mistakes of my life, I quit school. It doesn’t matter that I went back in a few years and got my diploma and entered college, the damage had already been done. Because of that mistake no agent would even talk to me let alone read one of my manuscripts and after a few years I gave up trying to get published and settled on becoming a storyteller. However, no matter how slight was the chance of getting published, I never stopped writing.

By the time my parents house burned in 1978, I had over thirty stories and a very good start on three novels; two science fictions and one fantasy. All of my work was stored in their home and just like everything else in the house when it caught fire, was lost. After that loss, I really did quit writing for a long time. Oh, I still made up the stories and spent many a hour spinning the tales to anyone who’d listen, I just didn’t write them down anymore.

Finally, a man that I’d first met in 1976, convinced me to not only start writing again, but to start trying to get them published. Read about him HERE. My first published novel, “Tianna Logan and the Salem Academy for Witchcraft” is actually comprised of several of my tales that I’ve told for years about a school for Witchcraft and Wizardry in Salem Massachusetts. A very large number of the stories that I’ve ever written were about witches, wizards, sorcerers, alchemists, dragons, unicorns, basically all things magical with a little sci-fi thrown in from time to time. So it stands to reason that the first full length novel I would get published would be about the magical realm and the second one is well underway as I write this.

You have subscribed to alerts for Timothy Everhart.

You have been added to Timothy Everhart's favorite list.

You can also sign-up to receive email notifications whenever Timothy Everhart releases a new book.