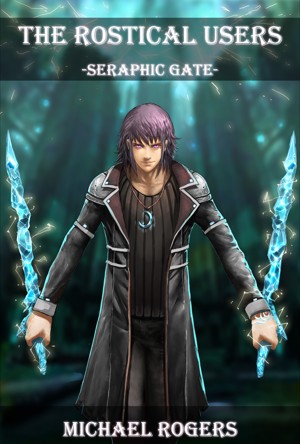 By Michael Rogers
Rated 4.50/5 based on 2 reviews
In the final and epic installment, our heroes finally fight the Consultant to the death. With the party's growing power, they go all out and try to stop him in his plans! Can our heroes defeat a man who wields the power of light and dark?

Meanwhile, the Valkyrie disgusted in Sofia challenges her herself!
Sofia, confident in her powers, challenges the Valkyrie to a magnificent battle in the sky! More
In the final and epic installment, our heroes finally fight the Consultant to the death. With the party's growing power, they go all out and try to stop him in his plans! Can our heroes defeat a man who wields the power of light and dark?

With high morals, imagination and a delicious craze for fantasy, The Rostical Guild and The Rostical Users were born.

Written like it's a script from a video game in an originally styled format, we hope to play our adventures in a game one day!

Michael Rogers, an author that absolutely hates reading (even his own series) and has never read a full adult sized book in his life, is a prime example that you can do anything once you've set yourself a goal or dream.

He has poured his life, sweat, tears and blood (yes, paper cuts hurt!) into his work. It may not be the literature you're used to, but he guarantees, if you give it a go, you'll fall in love with the characters like he has.

Any questions or enquiries, you may contact me here; rostical@live.com

Also in Series: The Rostical Users

I was able to read this entire series in just over a week.
I felt the ending was a little underwhelming, but having said that.
This has been a frustrating, amazing, emotional series.
I cried (properly if that makes sense) four times. Where I had to stop reading to blow my nose and collect myself.

The author teaches you morals like JK.Rowling does in her HP series. (Not that I'm comparing, just using as an example).

There were plot twists, surprises and untimely deaths. I felt for each and every one of the characters.

The bad;
- Like the review below me said, some characters have a "catchphrase" they like to say a lot, it at times, interrupts the flow of dialogue and can be frustrating.
- During the first three of five books, Lance is a horrible character, he utterly frustrated til no end! Despite this, he somehow became one of my favourite characters. It shows true character development and progression. It also shows that even adolescent immature people can change.
- The lack of detail, it wasn't until I finished the first book I realised there was a whole "Character BIO" & Appendix at the back.
- You could say the cliffhangers at the end of every book was a bad thing.

The Good;
- Like I explained at the start, a lot of character development and subjects such as suicide are touched upon nicely.
- The romance was well placed into the series. I'm always a fan of romance, but during some chapters of different series, the romance somehow "overpowers" the actual story, while in this series, it was actually a plot progression (the prophecy).
- The ability to make one laugh and cry, that in its entirely makes it a 5/5 stars for me!


There is so much I can say about this series, the bad and the good.
The writing in my opinion progressively got better, but the first two books had awkward sentence structures etc.

As a movie lover, I'd LOVE to see my favourite characters on the big screen!
I'm a follower and I can't wait for the next to series.

(reviewed 9 days after purchase)
diogo carvalho reviewed on April 6, 2013
(no rating)
honnestly this is a VERY BAD book in a frustating series
And now i am going to explain why
1)the series has a really interesting concept and ideas but the dialogue has sooooooo maaaannyyyy problems that pretty often it doesn t even make sense and you stop reading to think "why the hell are they saying this" or "why are they talking about that or like that" and most importantly-WHY DO THEY USE UNACETABLE SO MANY TIMES!!!!

2)when you first meet lance you think that he mgiht be really cool but after a few chapters you simple want to punch him in the face a yell- START MAKING SENSE! and WHY CAN T YOU BEHAVE LIKE A SLIGHTY NORMAL PEARSON WHEN PEAPLE ARE EXPLAINING THINGS TO YOU! seryously! every single time anyone talks about rostical or things very interesting to lance and a lot of times absolutly crucial he simply tries to ignore and insult the pearson that is talking, even though it is a completly stupid beahaviour

3)some of the lance fights in the entires series are uterly ridicule (like he grabing a sword and whitout any kind of trining sudenly becoming a master swordsmen as good as the characters that train for years or EVERY SINGLE TIME his attack doesn t hit or a minimal new thing happens he stays in shock (the setence used is always the same)and gets hit by the bad guy)but in this book his fights can t even be classified as bad! the way he thinks during the fights doesn t make sense and he uses the same rostical 99% of the times, even when it doesn t work the previous 10 times he tried it and gets very annoyed that it doesn t work and then gets hit(for example he only uses his ougis 1 time in the entire book!! and it is the same for most of his rosticals)

4)THE TIME THE EVENTS HAPPENED DOESN T ADD UP!!! PKMY and her siblings and most of her friends would need to be more than a 100 years old because they bellonged to the warriors before millard departed them, wich was more than 100 years ago!ah and as the yellow eye monster happened even earlier this means ryddler is older than i care to think and didn t even have radiatons! and he isn t the only one!

ok... i am tired of writting. basically i can t imagine how the autor can even dream of this becoming a movie when more than 90% of the diallogue o the series is UNACEPTABLE (lol) and no one would ever want to have anything to do with it. BUT CONGRATULLATIONS ON your world creation, descriptions and some of your ideas. they were pretty cool.

An amazing book in an amazing series, would love to go into detail about the things I love in this book but don't want to spoil it. This series is totally worth reading.

You have subscribed to alerts for Michael Rogers.

You have been added to Michael Rogers's favorite list.

You can also sign-up to receive email notifications whenever Michael Rogers releases a new book.