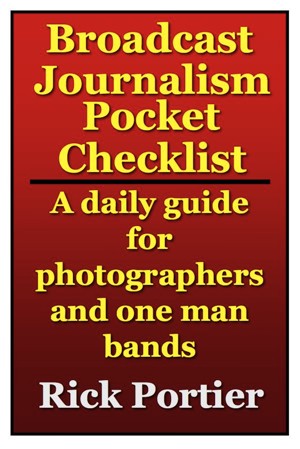 By Rick Portier
Once upon a time a person could specialize in reporting or shooting. Now, news directors want one person who can do it all.

Journalism programs do a good job training young reporters, but usually fall short when it comes to the world behind the camera.

This guide won’t make you a star overnight, but it will help you over the most difficult hurdles in the life of a photographer or MMJ. More
Once upon a time a person could specialize in reporting or shooting. Now, news directors want one person who can do it all.

Journalism programs do a good job training young reporters, but usually fall short when it comes to the world behind the camera.

This digital guide won’t make you a star overnight, but it will help you over the most difficult hurdles in the life of a photographer or MMJ.

Rick Portier has been shooting television news along the northern gulf coast since 1989. In 2008, budget cuts pushed him in front of the lens. (It was scary for him and more so for the viewers.) Even though he had spent all those years in the business, he still felt like a fish out of water. Today, he shoots, and reports for WAFB-TV in Baton Rouge, La.
Available ebook formats: epub mobi pdf rtf lrf pdb txt html
First 20% Sample: epub mobi (Kindle) lrf more Online Reader
pdb
Price: $4.95 USD
Buy Add to Library Give as a Gift
How gifting works
Create Widget
Tags: television news tv news news photography photojournalism broadcast journalism mmj multi media journalism multi media journalist news videography video journalism
About Rick Portier

Sooo, you wanna know about Turd?

Well, it's simple . . . I'm a television news photographer who got bored with real stories and started making shit up. First short stories, then a full-blown novel.

They're all stories about crusty news veterans who've been on the street too long. They're quick. They're punchy. And they're as gritty as the crews that patrol the mean streets looking for a scoop. Although my main character shares my crappy moniker, he's a sharper shooter and waaaaaay cooler.

Since my first night in a newsroom back at KTVE-TV/Monroe, LA in 1989, I've known that telling people's stories was my calling in life. The exhilaration of the controlled chaos and deadline pressure in the newsroom feeds my action jones. The people who welcome guys like me into their lives at the worst possible moments and greatest days ever feed my soul.

After more than twenty years behind the camera, I decided to take a crack in front of it . . . or rather, the conditions of the business forced me there. Most of my television stories hang out near the end of the newscast with the water skiing squirrels and the 400-pound watermelons, but that's just fine by me. It's the people I meet every day that are important. Everyone has a story to tell, and it's my job to help them tell it. I ain't got the kind of face you might want staring back at you from the TV screen, but it pays the bills, and no one has called my boss to say I'm scaring their children . . . yet.

Fiction is a hobby. I figured, "Hey, how hard can it be? I already make stories out of shit people tell me. With fiction, I can make them do what I want." Boy, was I wrong. Characters have a mind of their own, and getting them to bend to my will is even harder than pinning down a politician. It ain't paying the bills yet, so while you're here, look around. Find something you like and help out my retirement account. (TV don't pay what it used to.) Or, just check out some of my writer and TV friends. They're all good peeps with stories of their own to tell.

You have subscribed to alerts for Rick Portier.

You have been added to Rick Portier's favorite list.

You can also sign-up to receive email notifications whenever Rick Portier releases a new book.