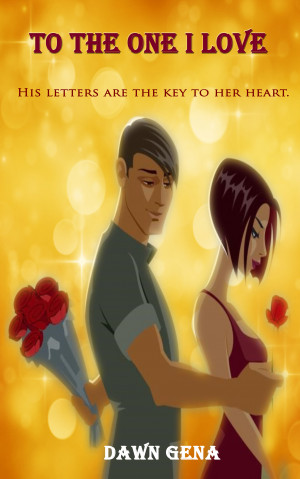 To The One I Love

By Dawn Gena
Rated 4.50/5 based on 4 reviews
One man, one woman and twelve love letters filled with romantic prose and passion. Can Jonathan capture Emily's heart? Read along and find out. More
"She already owns the most valuable thing I possess. My heart. All I have left to give her that's worth anything are my words. Will she understand? What can I say to make her mine?"

Jonathan has known what he wanted since his hungry eyes followed the dark haired beauty across a crowded cafe. Her name was Emily.

Jonathan decides to court Emily the old fashioned way, by sending her love letters. Will Emily write him back or see Jonathan as a dinosaur and reject him?

Every breath is a word. Every thought is a story. These are the words I live and love by. Much to the exasperation of my friends and family I love to write. Fortunately, they put up with my wacky ways and read anything I throw in front of them and love me enough to give their honest opinion. I hope you will to.

Whether you just stopped by my page out of curiosity or downloaded one of my books, thank you. Hope you come back for more.

The One by Dawn Gena
The One is a short video related to the book, To The One I Love. What do you remember about the first time you met the one you love? How did you know that person was THE ONE? Visit chronicleKeeperz.com/dawn-gena to find out more.

This story was way too short and everything happened way too fast. It was like watching a television show for the first time and skipping entire seasons between episodes.

For instance, the mothers of the two main characters got into a fist fight at the engagement party and at least one of them was arrested for it. Why did the fight start? Do the mothers have a history of being violent? Maybe they have bad history.

The ending was abrupt. It implied a violent ending that had no foreshadowing in the previous letters. The story is a series of romantic snapshots into these people’s’ lives, but I would have preferred a little more reality with some context to what was happening.

You have subscribed to alerts for Dawn Gena.

You have been added to Dawn Gena's favorite list.

You can also sign-up to receive email notifications whenever Dawn Gena releases a new book.