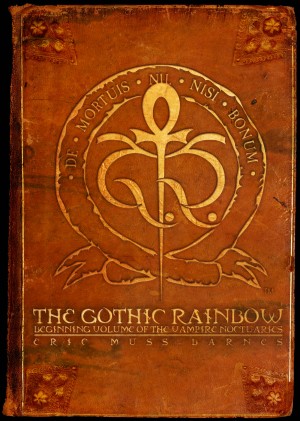 The Gothic Rainbow: Beginning Volume of the Vampire Noctuaries

Teenage goth girl accidentally finds herself the victim of a suave and manipulative vampire through her Ouija board. The teenage innocence and magic of The Craft, meets the darkness and tragedy of The Crow. The Catcher in the Rye if it was written by Edgar Allen Poe. More
Helle Tompkins has reached the end of her days as an outcast, suburban teenager. Ever since her beloved father killed himself, and they released Helle from the mental hospital for trying to join him, she's been in a place where her pain is far deeper than high school melodrama. No more hiding behind black lipstick and a mohawk. Now she's playing with pagan charms, Wiccan rites, and the scrying sorcery of her Ouija board. It's the perfect distraction until she summons the attention of a charming and sinister faerie prince. A seductive spirit lurking in the shadows of treebranches shimmering upon her walls, he may be something much more horrible than he claims. Will she succumb to bewitching promises and find salvation in his cruel embrace, or will his own agonizing secrets draw Helle into even deeper heartbreak?

Raised by the 1940's swingkid generation of his maternal grandparents, Eric Muss-Barnes grew up 2500 miles outside of Los Angeles; has spent years working at Walt Disney Studios; piloted hang gliders over 6000 feet above the Earth; dated fashion models, rockstar goddesses and glamazon actresses; been thrown and dragged by horses (arguably similar to his dating experiences); earned a living as an American Greetings toymaker and a Hollywood game designer; ridden motorcycles through mountains and desert sandstorms (make that "over" mountains, he's not Buckaroo Banzai); produced, directed and edited music videos and an award-nominated film; briefly wed a tattooed MENSA astrophysicist chick; crewed on an Academy Award nominated movie; skateboarded in pools all around California with XGames medalists; written an epic series of vampire novels; photographed numerous Playboy models and sold his images in art galleries; been published in multiple fiction/non-fiction anthologies; served 12 years hard time in parochial schools; and created and programmed a blog called InkShard where you can see videos and essays about his life as a writer.

Also in Series: The Vampire Noctuaries

Reviews of The Gothic Rainbow: Beginning Volume of the Vampire Noctuaries by Eric Muss-Barnes

You have subscribed to alerts for Eric Muss-Barnes.

You have been added to Eric Muss-Barnes's favorite list.

You can also sign-up to receive email notifications whenever Eric Muss-Barnes releases a new book.