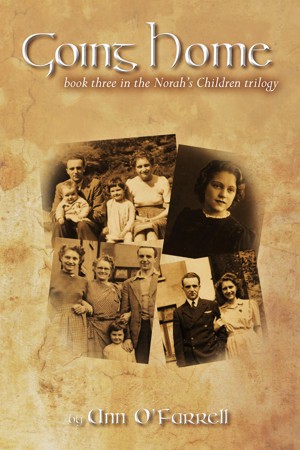 By Ann O'Farrell
For three decades the fortunes of Norah’s children have ebbed and flowed. Now they must adjust to a post-war period that is not all that was promised.
This third and final book in the saga of Norah’s children follows the five siblings into marriage and parenthood, and through success and sorrow. Overwhelming events now challenge family bonds that neither time nor distance have yet broken.

An Irish author, Ann worked in Ireland as a theater director, drama teacher, and Drama therapist. Her theater and teaching work was often with children, her dramatherapy involved clients of all ages, and with physical and/or mental difficulties.
Ann and her husband, John, retired to Florida and it is there that she began writing. Her letters home became humorous short stories. When some of these were accepted for publication she decided to attempt her first novel, Norah’s Children. That story eventually became a trilogy; Norah’s Children, Michael, and Going Home., and Ann has just completed a fourth novel, titled Kitty’s Hive, which should be available shortly.

You have subscribed to alerts for Ann O&#039;Farrell.

You have been added to Ann O&#039;Farrell's favorite list.

You can also sign-up to receive email notifications whenever Ann O&#039;Farrell releases a new book.