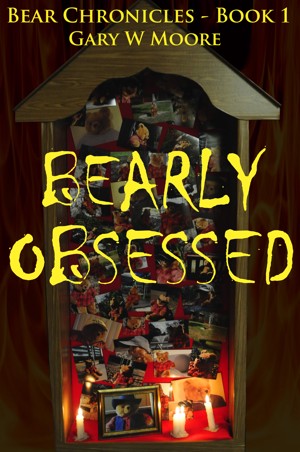 By Gary W Moore
A group of gay bear men living in Houston, Texas facing the year that will change their lives. A serial killer has come to town, and no bear is safe from the darkness. Will they all survive to see the new year? Filled with humor, danger, love and heartbreak, this story will leave you wanting more. More
Take a glimpse into a world that may be foreign to you, even though it takes place in Houston. Follow along with this tight-knit group of gay men and the year that will change their lives forever. But be forewarned, these big, burly, bear men aren’t your garden-variety gays.

They’ve been through tough times and their close bonds confirm this. However, nothing’s prepared them for what happens early in the New Year when their lives are shattered by a serial killers rampage through Houston. The police struggle to find the clues needed to catch this mad man, but with some help and a chance meeting, they finally have an ID. The only question after that is, can they catch him before he kills again?

Will everyone in this family of bears make it through to the New Year? Filled with humor, danger, love and heartbreak, this story will leave you wanting more.

Gary W. Moore grew up in a small town near the boot heal of Missouri, but ended up there because of tragedy. His mother died when he was 3 and then his father when he was 11. He was considered a change of life baby as they were both well into their 40’s when he came along.

As he was the youngest in the family, the three oldest siblings were married and moved out before he was old enough to walk, so he didn’t really know them. After his father’s death he was forced to move in with his oldest sister and her family. His two closest siblings (in age) were also in the moving van.

So a three bedroom house in St. Louis was being replaced by a two bedroom trailer. Two adults and 5 children living in a home that comfortably fit 3 people. Thankfully, this would only last for a few months. His sister and her husband were in the process of having a home built. Due to the new additions, changes were made, and the two girls would each be getting their own bedroom, while the three boys would be stuck in one. The math never did make sense to him, but the boys got along, where the girls didn’t. So, logically it was sound.

The change from a city of hundreds of thousands to a town of 300 was quite strange. And the fact that there were no minorities seemed odd. Some of Gary’s closest friends in St. Louis were black, and here it was nothing but white faces.

School was quite different as well because of the size. Instead of housing only elementary or middle school students, this one held everyone from Kindergarten to 12th grade, and only had around 200 students. The Kindergarten classroom was next door to the Home Ec and Shop. The school Gary left in St. Louis had over 500 students and that was only an elementary. His class in this small town was even small compared to the others in the school with only 13 students.

He moved away from the small town after a close friend threatened to ‘out’ him. It was a scary situation, knowing how many in the community would enjoy making him an example to the youngins not to try homosexuality. So, he moved to Florida and stayed with his oldest brother and his family for a while. He fell in love with Florida and resided there for several years. But in 1996 he moved to Houston and finally learned how hot it gets in the South.

He never knew he would like to write, but a friend suggested he come up with a story so they could do some homemade videos and put them on the internet. A book is what he ended up with, and has decided to keep the series going. Five books have been written, along with a companion book, but more stories are possible.

Many locations mentioned in the books do exist, but some have been created for flavor, so don’t go looking for King’s Alley if you ever visit Houston. But if you do visit and want to have Gary’s favorite breakfast, go to Spanish Flowers and order Chilaquiles, you won’t be disappointed. Sorry, Sonya doesn’t work there any longer.

You have subscribed to alerts for Gary W Moore.

You have been added to Gary W Moore's favorite list.

You can also sign-up to receive email notifications whenever Gary W Moore releases a new book.