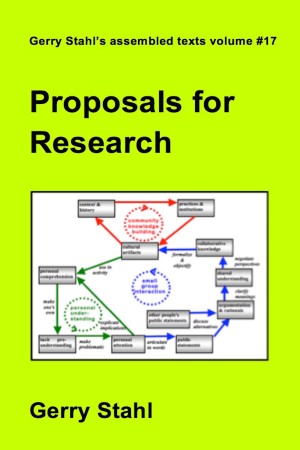 Gerry Stahl’s professional research is in the theory and analysis of CSCL (Computer-Supported Collaborative Learning). In 2006 Stahl published “Group Cognition: Computer Support for Building Collaborative Knowledge” (MIT Press) and launched the “International Journal of Computer-Supported Collaborative Learning”. In 2009 he published “Studying Virtual Math Teams” (Springer) and then in 2013 "Translating Euclid," followed by a longitudinal study of math cognitive development in "Constructing Dynamic Triangles Together" (Cambridge U.).

All his work outside of these academic books is published for free in volumes of essays at Smashwords (or at Lulu as paperbacks at minimal printing cost).

Gerry Stahl earned his BS in math and science at MIT. He earned a PhD in continental philosophy and social theory at Northwestern University, conducting his research at the Universities of Heidelberg and Frankfurt. He later earned a PhD in computer science at the University of Colorado at Boulder. He is now Professor Emeritus at the College of Computation and Informatics at Drexel University in Philadelphia. His website--containing all his publications, materials on CSCL and further information about his work--is at http://GerryStahl.net.

About the Series: Gerry Stahl's eLibrary 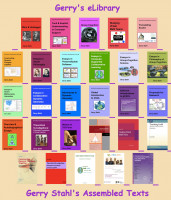 This series of books presents the best, most current versions of all of Gerry Stahl's writings and publications,
except for what appears in his academically published volumes: Group Cognition (2006, MIT Press),
Studying Virtual Math Teams (2009, Springer), Translating Euclid (2013, Morgan Claypool),
Constructing Dynamic Triangles Together (2015, Cambridge U.), Theoretical Inquiries (2020, Springer).

You have subscribed to alerts for Gerry Stahl.

You have been added to Gerry Stahl's favorite list.

You can also sign-up to receive email notifications whenever Gerry Stahl releases a new book.