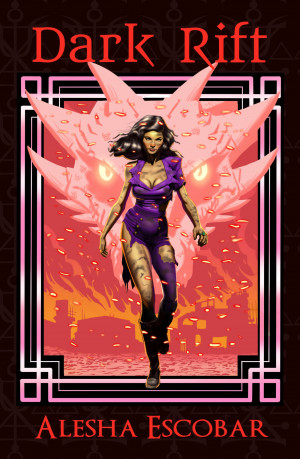 The Gray Tower, in its quest to stabilize a world that hangs on a delicate balance, has issued an order: Kill the Drifter.

Isabella George, an alchemist trained by the Tower, knows the identity of the Drifter and refuses to go through with it, because it hits too close to home. Instead of executing the Drifter, she protects the Time Wizard at all costs and ensures that the power to control Time never falls into the wrong hands. She sets out to lift the severe decree of the Gray Tower, and prove to the Master Wizards that the Drifter is the only way to win the war.

As Isabella unmasks traitors and embraces unlikely allies, her greatest danger may lie in her own heart--from the brutal desire for revenge, to the crushing guilt she carries...and the dangerous passion she tries to deny when she's with one man in particular.

As she attempts to sort things out both in her heart and head--and not mix up the two, a figure from her past comes along and makes an enticing offer to solve all her problems. The only payment required is her soul.

Alesha Escobar writes fantasy to support her chocolate habit. She enjoys everything from Tolkien and Dante to the Dresden Files and Hellblazer comics. She resides in California with her partner-in-crime, Luis Escobar, a 20-year art veteran on The Simpsons television show. Alesha is the author of The Gray Tower Trilogy, an action-packed supernatural spy thriller set in an alternate 1940's. The trilogy books have hit the Amazon bestsellers lists for Historical Fantasy and Mashups. You can find Alesha at her weekly blog, Fantasy, Mashups, & Mayhem, where she discusses fantasy and science fiction TV shows, movies and books, and celebrity gossip. She's just kidding about the celebrity gossip.

This is the abbreviated version. For the full version, please check out The Review Board.

Note: This was given by the author in exchange for an honest review.

1. The abstractness of the cover still remains a top pro to me. It does help to tie together all the books in the series. Plus it does help that my favorite color is blue.
2. The significant decrease of double agent speak made it easier to keep up with characters, particularly Isabella.

1. Circle of Repetitious Resolution: In almost every situation where Isabella meets with trouble, she immediately relies on one source for assistance. The scenes felt extremely anti-climatic because almost like a “train that is never late”, here comes the Circle of Protection. Just like John Cena and his five moves of doom, in order to keep Isabella interesting, she has to pull more out of her arsenal and a lot more often at that. The fact that this is the second book in the trilogy and we are still seeing the same magic tricks of the first is a bit disheartening.

2. Circle of Little Substance: Although Dark Rift didn’t have the sickening influx of characters like Tower’s Alchemist, all the introduced characters were treated as if they were passing by, including those who had significance in moving along the story. Not saying that the reader needs to know everyone’s back story but the main chemicals that are going to cause implosion, they definitely needed more exploring.

3. Circle of Malnourishment: I didn’t mind the Dark Rift being slower as long as one of the things achieved was improvement in the main character Isabella. If one was reading Dark Rift by itself, one would get annoyed at Isabella’s fits of temper, not thinking things fully through before she acts, and continuing to get in trouble time and time again. It’s even more painful when you’ve read the first book and realize that it’s practically the same Isabella only a different setting. Even when she is given instructions on what to do and told to be cautious, she’s acts like she’s listening but she really isn’t. In addition, her depiction of her emotions and experiences are very detached. In first person, I want to be able to feel the person’s triumphs and sorrows, and although she has lost many in not only this book but the previous book, I am not able to connect with her pain and her torment. I didn’t gain any likability towards Isabella and that spells trouble going into the third installment, since this whole entire trilogy is based on her coming into her own and for the reader to invest the time to ride things until the end.

4. Circle of Nonsensical Narration: I feel like a lot of the instructional information about the magic served more as fill in narration than adding to the actual movement or basis of the storyline. Dark Rift would have served as a better read if these teachable instances had been extracted.

5. Circle of Disbelief: For me, even a book that is based in fantasy has to have scenes implemented that have a sense of coherence. In other words, the author has to write it in a smooth pattern that makes the action I am seeing in front of me believable, despite the components being heavily rooted in magic. Circles of Protection were broken without explanations as to how a villain was able to do it. Other people are able to break through certain protections placed on Isabella without a smooth lead in as to how this would even play out. Isabella uses a power that she didn’t even have time to perfect and the reader is supposed to buy that she is becoming this awesome force to be reckoned with. It as if the author sat down and was like, “I’ll just throw a head scratching moment in right about now” and just leave the reader to figure it out.

I did want Dark Rift to serve as a better read for me than Tower’s Alchemist. Unfortunately it felt like “Same Script, Different Cast.” I am going to enact a Circle of Protection around my enthusiasm and hope all of the holes in the 1st and the 2nd books will be solved and conveyed better in the last book of this trilogy.

You have subscribed to alerts for Alesha Escobar.

You have been added to Alesha Escobar's favorite list.

You can also sign-up to receive email notifications whenever Alesha Escobar releases a new book.