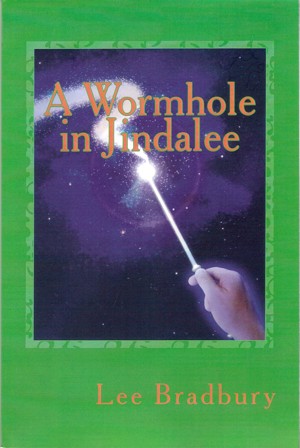 A Wormhole In Jindalee

By Lee Bradbury
At the Australian military Jindalee Over the Horizon Radar Network a wormhole opened. Mary realised that she was the only one who could rescue her sister, Elizabeth, who had fallen into the wormhole. Mary found herself on a strange dreamlike planet and find alien technology. Now the sisters must decide whether to reveal what they found to the military. More
Set in the near future and features the Australian military facility JORN (Jindalee Over the Horizon Radar Network) which was using a secret particle accelerator to emit exotic particles to see deep beyond Australia’s northern borders as well as experiments to transport objects through space and time.
Mary was notified that her sister, Elizabeth, had fallen into a wormhole that opened up at the Jindalee facility. She travelled to Jindalee and realizes that she was the only person who could save her sister. She must draw on all her strength and the bond between two sisters. But will the bond be strong enough to span the universe. Mary travelled through the wormhole and found her sister on a planet that seemed to be straight out of their dreams.
On the planet was an intelligence that controlled the wormhole. The sisters discovered they share DNA with this alien life form and decided they needed to help protect the aliens from exploitation by humans who only sought the planet’s resources and technology. Upon return to Earth the sisters must resist intense interrogation by the military who seek to uncover their secret.

Lee Bradbury was born in New Zealand but has lived in the inner city of Sydney, Australia for twenty years and has qualifications in economics and management. Bradbury is employed as a Financial Analyst by the New South Wales Government and has been involved in the corporatisation and privatisation of a number of Government businesses. Bradbury’s work history has included both the private sector and public sector in fields of economics, finance and insurance.

Bradbury has always been interested in science and science fiction and tries to keep up to date on scientific developments and advances, particularly in the areas of cosmology, particle physics and technology. Other interests include art, history, cooking, Chinese calligraphy, public policy and the military. Previously Bradbury has written papers on cost-benefit analysis and defence policy.

Bradbury enjoys and has travelled extensively including some periods of work overseas. Travel destinations have mainly been around North Asia, South East Asia and to a lesser extent the Pacific and Europe.

You have subscribed to alerts for Lee Bradbury.

You have been added to Lee Bradbury's favorite list.

You can also sign-up to receive email notifications whenever Lee Bradbury releases a new book.