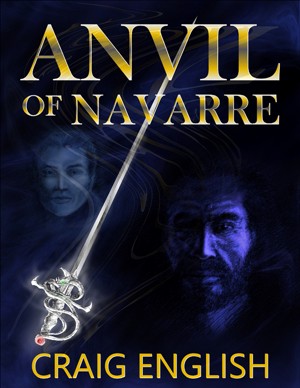 The Anvil of Navarre

By Craig English
A swashbuckling adventure story ... with a twist. Leaping from the polished stage of a magnificent theater to the blood-soaked grass of a dueling ground, from the twisted alleys of a grimy city to the glittering throne rooms of three vying nations, The Anvil of Navarre is an epic tale of love, revenge and sexual identity. Strap on your sword, this is the new face of adventure. More
Tristan Navarre is an alcoholic, veteran soldier haunted by torture. When his beloved nephew is kidnapped, Tristan is blackmailed into spying on his hero, the Duke of Arlienne, while on a diplomatic mission to prevent war. Tristan is torn between his loyalty and his secret assignment to discover whether the sword-wielding Duke is really a man, or a woman pretending to be one. If Tristan fails, his nephew will be executed.

Tristan's search for the truth reveals a plot to incite an invasion, assassinate a Queen, and usurp a throne. But who is it's author? Is it the pious archbishop who preys on children? The sleek and sadistic earl who craves power? Or is it the oh-so-reasonable younger brother of the King himself?

The tendrils of the conspiracy are far-reaching, entangling a one-armed girl surviving by her wits; a tailor's son who must prove his manhood by the sword; and a young Queen striving to save her country. Tristan's own journey brings him face-to-face with the torturer who has inhabited his nightmares since the war, and he is forced to examine his wounded life.

Leaping from the polished stage of a magnificent theater to the blood-soaked grass of a dueling ground, from the twisted alleys of a grimy city to the glittering throne rooms of three vying nations, The Anvil of Navarre is an epic tale of love, revenge and sexual identity.

A swashbuckling adventure story . . . with a twist.

Craig English was born in Los Angeles, California in 1957. The son of a journalist Robert Arthur English, some of Craig's earliest memories are the sound of a massive black Royal typewriter's keys smacking out a story on a deadline. Craig's writing is strongly influenced by the drama, cadence and tradition of the performing arts. He is an advocate for each character's strong, clear voice, and he loves storytelling that pulls like a riptide. He writes fiction and nonfiction, journal articles, and poetry. His most recent novel, The Anvil of Navarre, pays homage to classic swashbuckling adventure stories, while delving into the politics of gender and sexuality. Craig's current project is an urban fantasy/mystery novel, Black Swan, book one of the Dragons Among Us series. He is the co-author of Anxious to Please: 7 Revolutionary Practices for the Chronically Nice, Sourcebooks, Inc. (English, Spanish, Greek and Arabic translations).
In 1982, Craig graduated from the University of Washington Professional Actor Training Program and worked for 25 years as an actor specializing in Shakespeare, fight choreography, CD-ROM game voice-over, and commercials. He lives with his partner in Seattle, Washington.

You have subscribed to alerts for Craig English.

You have been added to Craig English's favorite list.

You can also sign-up to receive email notifications whenever Craig English releases a new book.