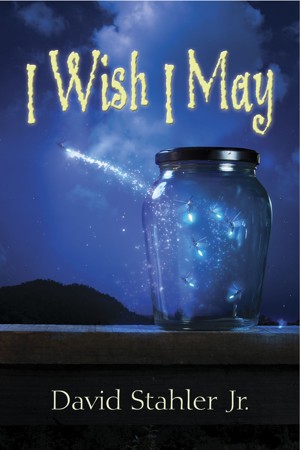 I Wish I May

By David Stahler, Jr
In the midst of dealing with school bullies, dysfunctional parents, and the death of his beloved dog, young Thurston Pickering’s life takes a series of comically darker turns when he frees a malevolent genie from a jar he finds in his attic. More
Be careful what you wish for…

When young Thurston Pickering opens a mysterious jar he’s found in the attic of his old house, he gets more than he bargained for. Soon, a green-skinned genie named Malthasar appears, charming the thirteen fireflies Thurston has collected in the jar. Each one offers a wish, a chance to fix every problem in Thurston’s life, with extra to spare.

Good thing. For a twelve-year-old, Thurston has more than his fair share of trouble. No one at school seems to notice him—except for Jason Bean and his pack of bullies. His parents are so busy fighting with each other, they forgot his last birthday. Worst of all, his beloved dog Mollet has recently died, leaving him feeling more alone than ever.

But with each wish, Thurston’s life takes a darker and stranger twist, and what at first seems like helpful advice from Malthasar turns out to be something quite different. Can Thurston discover the genie’s true designs—and a way to stop them—before it’s too late?

Written for the ten-year-old in all of us, I Wish I May combines twisted humor with modern fantasy to create a satire that speaks to how we approach life’s hardships. This cautionary fable takes the conventions of comic books and cartoons and examines them in a real-world setting, presenting the reader with a tightly woven narrative that is at turns darkly funny and tartly sweet.

“Middle graders will cheer Thurston onward in this quick-moving fantasy adventure that speaks to the question boys ask themselves so often: ‘I wonder what would happen if I just…?’ A warm welcome to this new would-be hero and his un-put-down-able story with its deliciously old-fashioned and unexpected ending.”

— Beth Kanell, author of The Darkness Under the Water and The Secret Room

Help find a cure for SMA! A portion of the proceeds from the sale of this book will be donated to Families of SMA, a nonprofit organization that funds research to find a cure for Spinal Muscular Atrophy. SMA is a degenerative motor neuron disease that affects approximately 1 out of every 6000 babies born. Find out more at fsma.org. Thank you!

A fourth generation Vermonter, David Stahler Jr. lives in the Northeast Kingdom of Vermont where he writes and teaches English at his alma mater, Lyndon Institute, an independent high school in Lyndon Center, VT. He graduated from Middlebury College with a BA in English in 1994 and received his MA from Dartmouth College in 2001.

An author of YA Fiction across a variety of genres with an emphasis on the unusual, his books include the Truesight Trilogy (a science fiction series with a dystopian bent), as well as the supernatural novels Doppelganger and A Gathering of Shades, all published by HarperCollins. His latest work, Spinning Out, published by Chronicle Books, was a Kindle 100 selection for May 2012 and a Kindle Daily Deal selection for September 29, 2012.

His work has received numerous accolades--including a Best Book Award from the American Library Association, Le Prix Farniente, and numerous state reading list awards--and has been translated into French, Italian, and Chinese.

You have subscribed to alerts for David Stahler, Jr.

You have been added to David Stahler, Jr's favorite list.

You can also sign-up to receive email notifications whenever David Stahler, Jr releases a new book.