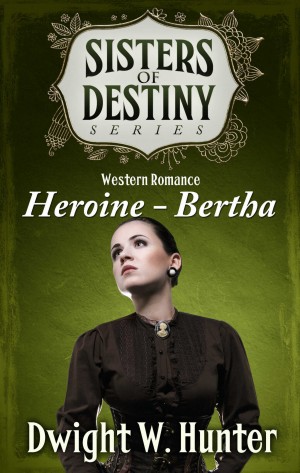 By Dwight W. Hunter
Bertha entered the world as her mother died in a drafty dirt-floor cabin on the Ohio River, pre Civil War. She became manger of a wagon factory and sole survivor of a Rebel raid that wiped out the community of Coopers Bend. Bertha out grew a limited vision business and life partner, and went on to manage a hotel, two gentleman club’s and ended her career as co-partner of a detective agency. More
The character of Berth was introduced in an earlier novel, Kate, when she became office manager of Modern Investigation Agency.
Bertha was born, as her mother was dying, during the pre Civil War era, in the isolated community of Coopers Bend, Kentucky; located on the Ohio River, where her illiterate father and partner built wagons.
Wet nursed by neighboring women, weaned on cornbread soaked in cow’s milk Bertha was mothered by a black woman, found on the riverbank, and educated by a woman holding only an elementary school diploma. She possessed a determined personality coupled with a ferocious appetite she read and extended her education by consuming all the books and newspapers she could find.
When demand for wagons out grew her illiterate father and partner’s management capabilities; at age sixteen, Bertha took over as manager and continued to grow the wagon manufacturing business until a Rebel raid obliterated Coopers Bend, killing everyone except Bertha.
Bertha moved on to restore an ill-managed hotel and was forced to flee for her life when caught in as vicious political scam. During a series of moves and name changes she managed two gentleman clubs and ended her career as co-partner of Modern Investigation Agency.
Along the way she fell in love with and left a myopic business partner; became rich and retired with a United States Deputy Marshall.

I was born and reared on the Nez Perce Indian Reservation in Northern Idaho, graduated from Nezperce High school in the class of '50, spent a four-year tour of duty in the Navy which took me to California, Tennessee, Japan and Alaska. After leaving the Navy I received a B.S. Degree in Engineering from Indiana Institute of Technology at Fort Wayne, Indiana and subsequently spent thirty years in the Aerospace industry and private business
Shifting careers in 1986 I received an A.S. Degree from the Allied Health Department of Mission College at Santa Clara, California, followed by ten years as a Psych Nurse with the California Department of Developmental Services.
Soon after retirement I revisited Idaho, to keep a blind date with Mary, who subsequently became my life partner. We pooled our money, bought a used van and RV trailer and became RV’ers.
One day, while enjoying the sun and sea at Morro Bay, CA State Park, I made a comment that someone should write bodice ripper romance novels about retired senior citizens. Mary replied with a question. Why don’t you? In answer to her question I authored my first novel about a strong-willed retired lady and a less then bright snowbird cowboy.
Like most nascent writers, following the birth of my first book I self published and quickly discovered potential readers were not scrambling to purchase this newly minted masterpiece. Setting aside my dreams for instant fame, I continued to write for my own amusement.
In six following novels I shifted time frames to the post-Civil War era and younger women protagonists. To date I have written seven titles in the Sisters of Destiny Series. Members in this fictional sisterhood possess a common gene, giving them the chutzpa to out think, out shoot and out maneuver ego driven men thoughtless enough to stand in their way.
After completing my seventh novel I learned about e-books and a friend offered to create a web site to market my books in their original print format. Unfortunately she died unexpectedly and the web site project suffered a still-birth.
A couple of years later I heard about Smashwords and quickly learned my initial attempt at website marketing books, in their print format, was not the way to bring books to market.
Mary and I have given up full time RV’ing and settled down in the quasi frontier town of Pahrump, NV. Since becoming domesticated, I have devoted a major portion of my time to converting books into Smashwords format for publication.

You have subscribed to alerts for Dwight W. Hunter.

You have been added to Dwight W. Hunter's favorite list.

You can also sign-up to receive email notifications whenever Dwight W. Hunter releases a new book.