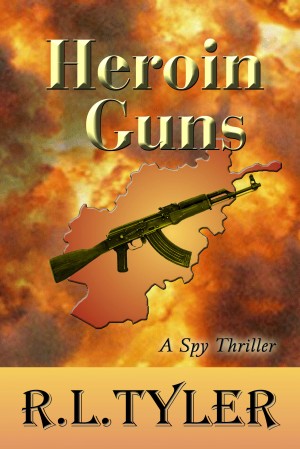 R.L. Tyler started writing spy stories over a dozen years ago and has a fascination for exotic countries and cultures.

Also in Series: Vince and Cat

Vince and Cat are under deep cover in Afghanistan. Vince's persona is Kochi, a humble Pashto speaking Muslim with a switchblade in his turban. Cat finds a burqa the perfect disguise that can even conceal an AK47 when necessary. Vince is haunted by the terrible role that heroin played in his childhood. Cat is the quintessential heroine who can cut a mujahidin's throat, hack a computer and fix tea without breaking a sweat.

So when a tribal warlord plots to topple the Afghan government and frame the American president, this unlikely husband and wife team is dispatched by the ultra secret PSF to thwart the scheme. Since drug money finances the plan, Vince's moral outrage is making him reckless. Fortunately, Cat has his back.

Heroin Guns is slick and gritty at the same time. The characters are engaging. Action leaps from every page leaving the reader anxious for more.

I love the combination of action in the world around them and the swirl of emotions as Vince faces the terror from his past
Great read!

(reviewed the day of purchase)
Adrieanne Gresh reviewed on Nov. 29, 2010

Fun and exciting with explosions at every turn. Keeps you pulled in with action and suspense.

You have subscribed to alerts for R. L. Tyler.

You have been added to R. L. Tyler's favorite list.

You can also sign-up to receive email notifications whenever R. L. Tyler releases a new book.