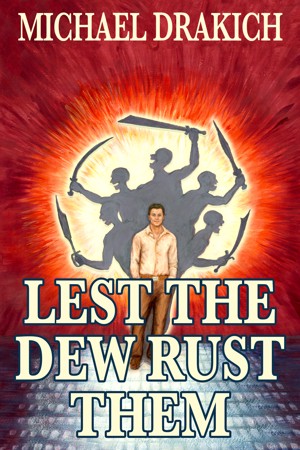 Lest The Dew Rust Them

By Michael Drakich
Rated 3.50/5 based on 2 reviews
Terrorism in America has a new game…decapitations!
Robert Grimmson faces the task of catching five men in New York City. They call themselves the Sword Masters with a single minded plan of terror through decapitations.
Barely has the task begun when a new arrival at JFK is a man importing thousands of swords! Alexander Suten-Mdjai is a trainer in the deadly art of s More
Terrorism in America has a new game…decapitations!

Homeland Security Director Robert Grimmson faces the task of catching five men in New York City. They call themselves the Sword Masters with a single minded plan of terror through decapitations.
Barely has the task begun when a new arrival at JFK is a man importing thousands of swords! Alexander Suten-Mdjai is a trainer in the deadly art of swordsmanship and Robert cannot help but believe there is a connection between him and the Sword Masters.
As he goes about the task, each step in his search is made more difficult through the interference of politicians, the media and his own government.
Robert’s examination constantly draws him back to Alexander who regales him with a tale of swordsmanship from his lineage featuring events of mankind’s bloody past and often oddly having a connection to the case before him.
With the clock ticking as New York collapses into a deep panic, he must catch the Sword Masters before it is too late!

A new and exciting author in speculative fiction, Michael brings a repertoire of science fiction, fantasy and thrillers to readers everywhere. Michael lives in the quaint neighbourhood of Olde Walkerville in Windsor, Ontario, Canada. Father to three, the family home is an historic Albert Kahn design built in 1895. When not writing, you can find Michael walking down the majestic trees lined streets. Writing is a passion of his that has led to the books you see featured here. It is his hope you enjoy his works.

If you buy a copy of any of my works, please, visit again to provide a comment or a review.

Lest The Dew Rust Them - An Action Thriller Novel - Book Trailer
Terrorism in America has a new game…decapitations! Homeland Security Director Robert Grimmson faces the task of catching five men in New York City. They call themselves the Sword Masters with a single minded plan of terror through decapitations. Barely has the task begun when a new arrival at JFK is a man importing thousands of swords!

Roni’s Rosebuz Review:
Overall: 3 of 5
This book had a lot of good features, but for me it could have been better with some basic modifications. The cursing and unnecessary use of the Lord’s name detracted to the story. I will say, though, that I was surprised at how well the story-within-story scheme worked with this novel. I am impressed. The characters were believable and the action was definitely not lacking. Overall, a good novel.
Family friendliness: 1 of 5
This author used foul language, and the Lord’s name. There were scenes that involved killing in graphic detail as well as a scene that involved sex. Overall, not the most offensive book I’ve read, but certainly not the most appropriate for families. Keep this one away from teens and below.

(reviewed 2 years after purchase)
John Martin reviewed on June 26, 2013
(no rating)
This ebook was provided to Bex 'n' Books in exchange for an HONEST and not necessarily positive review.

Lest the Dew Rust Them; by Michael Drakich.

The book has good & bad points; the concept behind it is quite good, especially in the light of the recent horrific event in the UK, with terrorists out to scare middle America with small scale atrocities, a series of beheadings. The group is not too well explained & appears to be a random mix of of members, with no real political aim and a couple of them in it just for the kicks!
The book contains a number of historical references which actually take up a quarter of the book & while interesting, I feel the space would have been better used to flesh out the characters; some of which are fairly well drawn, but others are very two dimensional, more stereotypes than anything else.
If you like the style of book written by Robert Ludlum or Eric Van Lustbader then this may well be for you, I would just have liked the book to be longer to allow more depth to be added to the plot & allow the final scenes to feel less rushed. In fact to me it reads a bit like a screenplay, with more to be added in production.
Reviewed June 10th.

received this book from author in exchange for my honest opinion of it.

My Thoughts:
The title was an interesting one and very unique, whereas the cover photo didn't inspire me to want to reach for it. However much emphasis I do put on the cover illustrations, I will read a book even if I am not a fan of the illustrations.
I am glad I did.

Lest the Dew Rust Them is an interesting mix of crime drama, mystery, historical fiction, and (probably just to me) political satire.

Many of the characters tended to get on my nerves for their blatant racial profiling that they were capable of doing; whereas some of the characters were just idiotic in their lives. My favorite character in the whole book was without a doubt, Alexander Suten - Mdjai for many reasons.
He is a honorable person. Even as he is being suspected for some very heinous crimes all because of a title, he is helpful and polite throughout it all.
Another reason I respected him so much is because of his knowledge and talent. He is a hell of a storyteller and I enjoyed hearing about the history of each blade he owned. Personally, these were my favorite parts in the story;the accounts of the blades and his ancestors' use of them.
Because of this section, the supernatural fan in me was hoping for some type of reincarnation like plot thread, but alas there was none. But again, that is just me.

There are other characters in the story that play some major parts in the story, like the Homeland Security director, as well as the antagonists too, but they really didn't capture my attention like Alexander Suten-Mdjai did.

I will mention that I had high hopes for the antagonists being pretty worthy opponents but towards the middle and end I was just disappointed in their ways. It seemed like they really didn't have any idea what they were doing, although, that could have been the deliberate doing of the author. I did wish that we weren't informed of the criminals so early in the book. It would have been more mysterious if we may have had to guess at their identities first.

The plot was a creative one as well as the choice of weapons interesting. Also the manner in which many of the victims were destroyed was also entertaining for a crime drama.
There was a strong message going throughout the story that shows us how civilization will slowly break down when people get scared. Accusations, racial slurs, and bigotry become more commonplace as people lose their securities and feel like they are being boxed in by something they can't control and can't understand. I felt like Mr. Drakich really understood this and made it an important part in his book for people to grasp.

I wasn't wholly impressed with this story but at the same time I did find parts that were interesting enough that kept me turning the pages and finishing the book. The criminals as well as the police caused me to see it more of a satire in many ways. I would have enjoyed the Sword Masters to be a little more adept at the mission they were trying to accomplish and I was a little disappointed in police's ability to find them.

But all in all, the story was an okay read and I am going to give it four hearts because even though there were areas that I disliked; I found myself being drawn into the story,turning page after page, until I was already at the end. And I was not expecting it to end the way it did, so yay for twists!
[Though in this case I am not really in love with it; I did think it merited a four heart{or stars} rating for the implications shown when the society gets scared]

(reviewed 4 days after purchase)
Jennifer Hyndman reviewed on April 1, 2013
(no rating)
Enter the crime scene. It's a beheading and there are tripod marks on the floor in the blood. Terrorism?

The author smoothly, quickly and concisely paints each character and scene in the book so that you do more than read about them, you understand them. Rather than spend pages on character development this author effectively achieves the same effect within just a few paragraphs.

I LOVE how he switches between character perspectives at exactly the right time so you get the round-robin effected scene. You see it from each vantage of each character and it works! It keeps you going further into the chapter and eventually you'll be in chapter 4 wondering how you got there so fast.

This entire book was nothing but entertaining. That's why I had to leave a review, so that I can thank the author. I have never read a crime-type book that I liked and this book was so good that it's going on my favorites shelf.

I'm reading it again for bedtime reading because I felt I read it too fast the first time. I just wanted to share how fun this was and I'm thoroughly impressed at the story-telling of this new author.

You have subscribed to alerts for Michael Drakich.

You have been added to Michael Drakich's favorite list.

You can also sign-up to receive email notifications whenever Michael Drakich releases a new book.