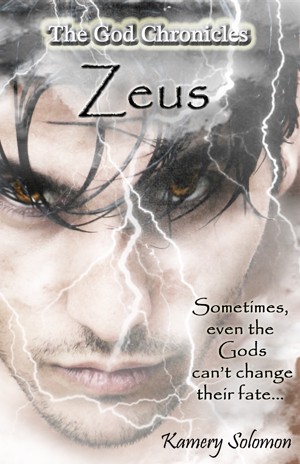 Sometimes, even the gods can't change their fate...

When Karly moves to Las Vegas, she happens to run into Zeus Drakos, owner of the new hit resort and casino in town. Over time she will discover that there's much more to him that what lies on the surface. Will she be able to handle the truth? More
Nominated for the 2013 "Best Sugar Shock Novel" award, Best Male Character, and Best Cover!

From #1 Bestselling Genre author Kamery Solomon comes ZEUS, the first book in her much loved The God Chronicles series.

“I can't wait to read the next one!”
~ Sam Pearce, Amazon Customer

“It is the perfect start to what is sure to be a fantastic series.”
~ Random Museomy

"This was my most ABSOLUTE FAVORITE book that I have read in a long time… I was unable to put this book down from beginning to end and I definitely want more."
~ Lisa Markson, Paranormal Bookworm

"I couldn’t put it down! It’s one I want to carry around with me everywhere so in those spare moments waiting on someone or something I can escape back into it... This is a beautifully written story that I highly recommend! In fact I already have to all my family and friends. "
~ Brenda Anderson, Naughty Bits Book Reviews

“Loved this book!!!”
~ Delphina, Delphina Reads Too Much

“I literally couldn’t put it down!”
~ Tigerakp, Amazon Customer

Sometimes even the gods can't change their fate...

Vegas is not where Karly had imagined herself to be at this point in her life.She was supposed to be living in California, soaking up the sun and enjoying the life of an artist. Instead, she's just moving out of her parent's house and going to a school that could loosely be called her second choice. When she meets Zeus Drakos, owner of the new hit casino and resort in town, he seems just like every other jerk guy out there. How was she supposed to know who he really was?
Download: epub mobi (Kindle) pdf more Online Reader
lrf pdb txt
Price: Free! USD
Add to Library
Create Widget
Tags: love mystery god kiss magic passion myth goddess college greek
About Kamery Solomon

#1 Bestselling Genre Author, Kamery Solomon, has been delighting readers with her God Chronicles series, featuring modern day adaptions of Zeus, nominated for Book of the Year and Cover of the Year, Poseidon, Hades, Adrastia, & Exoria. Kamery has also wooed her readers with her #1 bestselling fantasy novella, Forever, and her contemporary favorites, Taking Chances and Watching Over Me. Her most recent blockbuster series and #1 bestseller in Time Travel Romance, The Swept Away Saga, has had readers captivated on the high seas of romance and adventure! Kamery lives with her beautiful family in the White Mountains of Arizona and can often be found singing something from a Broadway musical with her siblings.

Also in Series: The God Chronicles

Very enjoyable! A good plot, nice characters, and it was definitely enticing!
The only problem was it felt rushed. It should have been longer!
Please finish the series. I cannot wait to read the rest.

I loved it!!!! Can't wait to read the others in this series. I could not put it down, I finished it in a day lol. I would definitely recommend this book to anybody.

This was an enjoyable and easy read. I think that most anyone who enjoys romance will enjoy this. I just can't give it a full five stars because there wasn't a time when reading it that I was really surprised or had to think about anything.

Unlike most of the romance out today, Zeus has no graphic anything, so don't worry about giving this to a teen to read.

Great book, Add this one to your bookshelf, I like books that are not the norm, that have that out there feel and this gave me the perfect feel!

I enjoyed this book, I am a major lover of mythology so it was a perfect choice for me.

I'm on the fence with this one. I rated it 4 rather than 3 stars because I think it has a lot of potential. I love Greek mythology and any book that represents this is going on my TBR. Aside from some minor grammatical errors, there were some inconsistencies or things that just felt a little off. For example, Zeus is a God. He has been around a long time, yet he came off as a young twenty something year old guy trying to win over a sweet, innocent girl. Not some all powerful deity who just happened to be exiled temporarily. Wait! He did come across that way at first while in the club after having just met Karly, but then he drifted away from that. And most twenty something year old guys don't own a resort/casino in Vegas who aren't "harder/tougher". I think the author was trying to go for his coming across as someone used to getting what he wants to "changing" into a guy that Karly would be interested in, but he felt off. He was working too hard to get there at the start of their relationship. He does come to explain why he came off the way he did in the club, but he also stumbles through that conversation. Again, not how I would expect a deity to come across.

We know Karly is 21 and off to Vegas to continue her education after completing 2 years of college in her home town. Small time girl overwhelmed by sin city, yep. Some of her responses were interesting too. She was angry about his being divorced because he had not told her when they first met. Um, when I first meet someone I don't start off with the negatives about myself such as "I was married, but turns out that was a big mistake". Those are things shared as a relationship develops (basically, when you know you want to be in one and are both on the same page). She runs away from her parents home and leaves her "boyfriend" there to explain why she ran off? BTW, I don't see the King of the Gods calling himself "boyfriend" nor giving goofy grins. Sexy, playful, cheeky, sure, but not goofy.

So, I do love the idea of the story, but (and people, this could just be me) I think our hero needs to be a little more consistent than he came across. Karly eventually comes around and she is easier to believe than he was. Again, I did like the story line and will read the next book (Poseidon is my favorite brother), but I hope he is more reflective of what a God would be throughout the book and not just at the beginning and sprinkled here and there throughout the remainder of the story.

You have subscribed to alerts for Kamery Solomon.

You have been added to Kamery Solomon's favorite list.

You can also sign-up to receive email notifications whenever Kamery Solomon releases a new book.