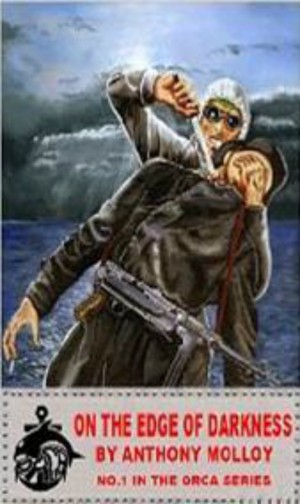 On the Edge of Darkness

Born: Yes I was, despite Hitler bombing my family out of house and home in London. I think it was a personal thing between him and me, I had two balls and he didn’t. If I’m right it was some sulk.
The evacuation resulted in my being born a ´Devonshire Dumpling´. I went back to Bideford once, to the actual nursing home where I was launched, no blue plaque yet. I’m pretty sure that must be down to Council cuts.
Schooling: Rotherhithe New Road. That was the Rotherhithe before they got rid of the rats in the riverside warehouses and installed the other sort.
I was actually there, aged nine, when our neighbours Sunday joint floated away on the flood of 1953. Surely everyone alive at the time remembers that, the leg of lamb I mean, my family and I chased it for miles along with the rest of the starving thousands of Rotherhithe. As I recall it outpaced us all, we were all rather thin and weak at the time, I think it must have ended up gracing the tables of the ultra rich downstream.
Undeterred we searched for days until the increasing size of the mob was spotted by the Government who thought we looked hungry and , as a measure of their concern, called out the riot squad. They fired rubber bullets at us made from metal; they couldn’t afford the rubber at the time thanks to Malayan speculators.
But I digress, my teacher at Rotherhithe thought that, because I liked drawing ships, I might like to go to sea. Perfectly logical, when you consider that one of my class mates, who enjoyed drawing plants, later became one.
So I went to the London Nautical School, there I learnt navigation, seamanship and how to muffle screams whilst receiving six of the best from the headmaster. Again undeterred I left as soon as I could, but they kept dragging me back until, at fifteen, I was able to leave legally and without the blood hounds and the skirmish lines that so blocked the Waterloo traffic.
I ran away to sea for two pound fourteen and six a week gross and enlisted at Blackheath Recruiting Office, not there now, I burnt that to the ground during my first leave.
There followed a year of hell, the beatings were fine, but the sport…every afternoon.
Come on!
Someone, I can’t remember who, spotted I wasn’t keen and decide I might prefer hard labour; they were all so sensitive in those days. It was then I acquired a liking for hard work. Hard work equals no pain being the rough formula. God how I loved HMS Ganges. They even put Bromide in your tea; I’m still waiting for that to take effect.
In those days you signed on in the Navy for nine years from the age of eighteen, there was a chance to buy yourself out when you were twenty four. I think it was that consoling thought that turned most of us to booze.
Then in 1971 they stopped the tot, That was the last thing I remember until I woke up in a Horticultural College studying that subject and married to my wife( I married her on April the first so as not to forget what a fool I was, I told Brenda it made it easier to remember the date.)
I then spent thirty odd years adjusting to life without brutality until finally I retired to Spain where I have used their cheap red wine as a kind of dummy ever since.

If you like Navy SEALS type of stories you'll like this. It has lots of commando type raids on enemy ships and bases.

Authentic story about tough Marines on special operations. Told with inside knowledge and quite a bit of procedural detail if you go for that sort of thing. The new tactics described were controversial at the time, but they were needed to win the war.

This is filled with the hard core blood and guts Navy action that I really enjoy. 5-stars for sure. Thanks, Shipmate for taking the time to write this all down. From my perspective it seems this author may very well have lived through some or all of this.

Authentic stories of daring combat at sea and ashore. I wish the author used a bit of the humor he shows in his bio. Much respect.

Really enjoyed this authentic tale of WWII British Marines and the tactics they employed. This is a hard core Navy story told by someone who knows what he's talking about.

(review of free book)
DoloresMatthews reviewed on March 9, 2016
(no rating)
I really like sea stories and enjoyed this one. This sea-faring war story is chock full of action and maritime details. The British navy and marines are using new aggressive and hostile tactics in WWII, and they are vividly recounted by a sailor who obviously has plenty of first hand knowledge.

Molloy knows his ships and the routines aboard. The book follows the hit and run antics of the British navy's torpedo boats and marines. There is plenty of unexpected action while the scenes and conversation define the human side of a tar's life in WWII. I like a story that teaches as it entertains. This is one.

You have subscribed to alerts for Anthony Molloy.

You have been added to Anthony Molloy's favorite list.

You can also sign-up to receive email notifications whenever Anthony Molloy releases a new book.