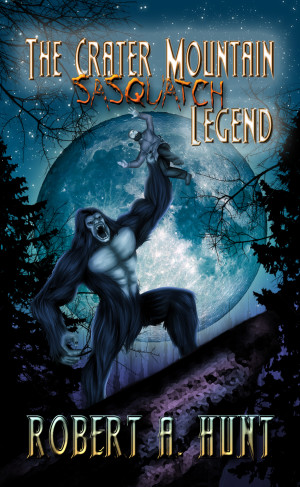 Robert A. Hunt resides in British Columbia, Canada with his wife and five children. He is the author of the eight published titles, including the Genation series, Jasper series and Sasquatch stand alone Legend series. He enjoys writing adventurous tales like science fiction, fantasy and historical fiction They remains unpredictable with new perspectives and clever story twists that distinguish, Robert A. Hunt as an author.

This was a really enjoyable book. Putting Sasquatches in the same story as aliens from outer space was a great idea & kept me glued to the bo0k until I finished it.

I loved every part of reading this book ‘The Crater Mountain Sasquatch Legend’. Reading this book is very easy to understand and to follow the story. Robert has a style of his own in writing. I liked the way this book is written, as it is full of suspense, and the writing is well descriptive of what is happening. This book made me feel as if I am part of the story.

I highly recommend this book to be read, especially by those readers who like suspense, who enjoy reading legends and for those who enjoy imagining beasts, creatures and the like. Furthermore, this book is also for those who loves a mystery novel. Robert’s writings is very interesting, fresh and with new ideas and creativity.

The Crater Mountain Sasquatch Legend was an amazing story that I can't recommend enough!
At the start of the book it was from Gurchukk's (The sasquatch) point of view which was written beautifully. It would have gotten repetitive if it was from Gurchukk's perspective the entire time. The story soon changed in perspective by revealing the main human character named Trevor, who was a super relatable character. It brought an interesting twist to the plot.
The Bigfoot cave was described in great detail and really set the mood. Another being Gurchukks family who were really interesting characters.
One of my personal favorite parts was when Gurchukk fought Skurtchotte (who is a giant ferocious bear) I enjoyed this scene because it was such a unique start to the series. Yeah that's right, series! It was explained that Gurchukk and Skurtochotte have a history which makes me want a prequel based on that. I don't see how anyone could not enjoy such a captivating story.
A neat fact I learned outside of the story is that Crater Mountain is an actual place and because I come from Canada (which is where the mountain is located) I relate so much more.
In conclusion I would highly recommend this story to anyone. especially if you enjoy bigfoot. It is also free so what are you waiting for, pick it up already. I just got Robert Hunt's other free book Jasper and the Shelter of Angels.

I want to thank Robert A. Hunt for her commitment and hard work in this worthwhile endeavor.


This story begins with a Sasquatch named Gurchukk doing to battle with a grizzly bear named Skurtchotte to see who will be king of the mountain.

The bear and sasquatch begin to fight on the edge of and Indian village. The Indians begin shooting arrows and rifles at them. Skurtchotte is losing and runs into the Indian camp and while the “little people” are killing the bear the Sasquatch in “a moment of spontaneity” before he “could process another thought, or make his next decision,” kidnaps a four year old girl.

Is this a YA novel? Evidently not. Is the writer a YA? Nope, Robert A. Hunt doesn’t look like a young adult to me though his writing is certainly juvenile.

The girl is adopted by the Sasquatch who find “at the very least, she would make a very nice pet.”

Chapter two skips ahead fourteen years and introduces a veteran, Trevor McKinnon. He’s read an article in an 1865 newspaper saying where he has arrived at is a good spot “to start a prosperous life” He purchases a homestead, goes hunting and stumbles upon Gurchukk his wife, baby and “pet” Indian girl in a cave.

Gurchukk keeps as a prisoner. Gradually, Trevor becomes friends with the family.

Then the aliens arrive.

I got to chapter five before I quit. I kept reading because I couldn’t believe this book could continue to get worse. It did.

The Crater Mountain Sasquatch is hardly worthy of a review. As far as suggestions for improvement it would be difficult to know where to start. Author Robert Hunt needs to greatly develop his skills as writer and a storyteller.

This is the problem with free and easy self-publishing – anyone can publish anything.
What makes this travesty a tragedy is it’s next to impossible to differentiate works like The Crater Mountain Sasquatch from excellent novels like Not Lost for Lookin’ by Lexi Boeger , War in a Beautiful Country by Patricia Ryan and The Last Bad Job by Colin Dodds.
Hopefully, my review will help in this regard.

If you think this review is harsh consider it a reality check for the author. Like anyone else, Hunt could still learn to write better. Writing’s a craft and like any craft it takes lots of practice to get good at it.

Prior to publishing his next work though, I would strongly suggest he take some courses and join an objective critique group.

(review of free book)
Laurie Champion reviewed on May 5, 2015
(no rating)
I love to read Bigfoot and Sasquatch stories, both fiction and non-fiction. I totally enjoyed this book. It had it's little grammar errors, especially in the first part but then it straightened out and evolved into an engrossing story that I wanted to keep reading. I like the fact that the author tried to do something different with this book than the usual spin. Most Sasquatch tales usually either present them as cuddly, gentle, hairy humans or horrible blood thirsty monsters. This book captured their ability to be dangerous simply because of their size and strength, while keeping them somewhat human like in their nature. I feel this is a more realistic portrayal than the other two extremes that are most popular in this genre. The scene where a Sasquatch destroys a cabin shows the absolute power of these creatures, and also how out of place they would be in our little world. Because the book takes a turn towards science fiction with the alien connection, I did not give it five stars simply because I hate alien stories to be honest. Nevertheless I did enjoy this book and would recommend it to anyone who likes Sasquatch stories. The book also includes a bonus chapter which is always a nice touch to me.

You have subscribed to alerts for Robert A. Hunt.

You have been added to Robert A. Hunt's favorite list.

You can also sign-up to receive email notifications whenever Robert A. Hunt releases a new book.