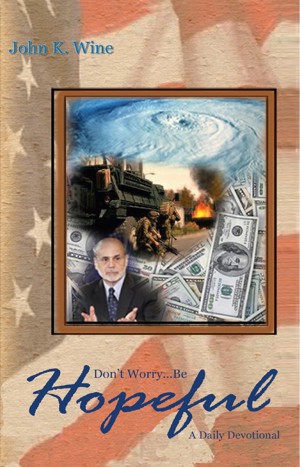 Don’t Worry – Be Hopeful! Easier said than done? With global events unfolding at a very rapid pace can we not only say “don’t worry but be hopeful and cease to worry.”
Major storms and disasters, conditions of war, financial uncertainty, political unrest, unsettled world currencies, food and energy costs at all-time highs causes much concern. Why not depend on the only real hope offered to the human race!

This handbook and guide will become a real companion to you – read it over and over!

Wrestling the Powers of Darkness -

"For we wrestle not against flesh and blood …"
-Ephesians 6:12

The most strategic battlefield in the universe is the mind. Never before has there been the attack on the mind with the magnitude that presently exists.

The Bible says, "For we wrestle not against flesh and blood, but against principalities, against powers, against the rulers of the darkness of this world, against spiritual wickedness in high places" (Ephesians 6:12).

Since we are living in the last days of God's prophetic time in history, then we must expect and prepare for an intensity of Satanic warfare. Every Christian should learn how to appropriate God's provisions for daily living.

Now is the time to exercise faith strong enough to overcome fear, anxiety, and worry; to enter into God's perfect peace and stability; to appropriate the "peace of God that passes all understanding" that God has promised every believer - no matter what the circumstances.

Comments from Dr. Jim Guth with the Billy Graham Organization, about the Author: John Wine

“I have known and worked with John Wine for over 10 years. He was mentored by Dr. Bill Bright, the founder and president of Campus Crusade for Christ. John developed a passion and mandate for the GREAT COMMISION, given by Christ to share Christ, starting in Jerusalem and to the utter most parts of the world (John established the GREAT COMMISION CONNECTION).

The first addition titled “Think on These Things”, printed by the 700 Club, Dr. Pat Robertson, which I helped distribute as a part of the Florida Men of Integrity, to state prisons throughout the state of Florida, resulted in many persons receiving Jesus Christ as their personal savior.

Think on These Things found its way around the world.
Don’t Worry… Be Hopeful is the next blessing from God”.

“Jesus said, “If you hold to my teaching, you are really my disciples. Then you will know the truth, and the truth will set you free” Don’t Worry … Be Hopeful is an easy-to-read devotional and spiritual handbook. It is a comprehensive reminder of biblical truths and of the abundant life given to us through the grace and gift of God in Christ Jesus.”

John Wine is the Founder and President of Sharing Christ Ministries, a discipleship and evangelism organization committed to equipping Christian believers to live and share Christ as a way of life. The Sharing Christ Ministries past involvements include: the Billy Graham Films, Campus Crusade for Christ, Evangelism Explosion, and over 30 years of Christian radio and television. A native of Daytona Beach, Florida, John met Jesus Christ as his personal Savior on March 12, 1966. Since then, he has obtained 72 credit hours, based on Bible doctrine and evangelism, from Huntington Theological Seminary. He has helped establish a number of churches throughout Florida; and was the host of the Time to Share radio program for over 25 years. He has written a number of books, tracts, and publications; including Living Evangelism, Contest of Wills, Think on These Things, The Best of Stress, and Christian Men Growing in Christ. He has also produced an audio-based Bible study through the entire New Testament called Unchanging Truths. He is now actively involved in the bringing of our times to light and “Sounding The Trumpet.”

You have subscribed to alerts for John K Wine.

You have been added to John K Wine's favorite list.

You can also sign-up to receive email notifications whenever John K Wine releases a new book.