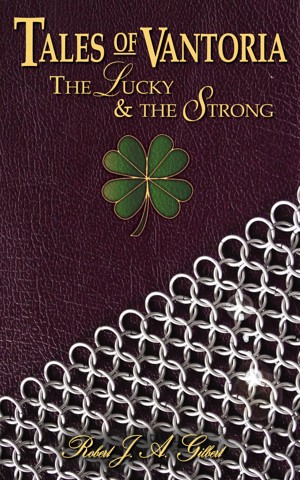 The Lucky and the Strong (Tales of Vantoria book 2)

By Robert J. A. Gilbert
Rated 5.00/5 based on 1 reviews
A reckless fairy and a rugged swordsman join forces to stop an evil menace to the kingdom of San Ocro. More
"Just because you are a child of God, that doesn't mean you can act like a child!"

O'Mary Saint Isaac is a fairy with a reckless thirst for adventure. Renaud is a battle-hardened swordsman with no time for fun and games. The two could not be more opposite in how they live their faith; while Renaud relies on his strength and his caution, Mary trusts in the Lord to deliver her from danger.

When Mary wanders into the world of Shift, she finds herself with more adventure than she bargained for, and Renaud finds himself with more trouble than he can handle. Lost in a forest and surrounded by an army of ferocious trolls, Mary joins forces with the swordsman and his small band of adventurers. Soon the two are separated from their friends and faced with a desperate quest: to protect a group of helpless children from the marauding enemy. But there is more at stake than just rescuing the innocent and repelling the enemy, because behind this army of monsters lurks an even more dangerous foe.

The Lucky and the Strong is the second book in the Tales of Vantoria series. In this adventure, Mary and Renaud discover how different two people's belief in God can be. Can Renaud protect his reckless companion from the perils of the forest? Will the differences in their beliefs divide them...or bring them even closer together?

I am a storyteller at heart.

I inherited it from my father who has told stories for as long as I can remember. His stories of his own youth, his travels, and his adventures in Africa as a bush pilot were as inspiring as they were fascinating.

At this time I am a writer by hobby. I also design board and card games, write songs, and dabble in a few other creative mediums as well. My biggest love is teaching, and it is through teaching that I have discovered the art of fables, parables, and morality tales. You can read many of these on my blog page.

Mary is a pixie with a penchant for getting into trouble. Her complete dependence on God to get her out of scrapes would be commendable if not for her constant habit of getting into them. But when she steps through a portal into another dimension, she discovers that God has a plan for her, and part of that might mean doing some of the 'heavy lifting' for a change.

Gilbert's sequel to The Sarian's Sword delivers a fast-paced entertaining adventure, populated by the characters from the previous book, but revolving more around Mary and Renaud. Once again, villages are being burned and Wenchell and his friends are out to find out why, when Mary pops through a dimension door and bumps into them. Renaud spends much effort as God's Agent trying to save Mary from her own risk-taking.

Content:
Violence:
As in The Sarian's Sword, violence is expected and delivered, and much of the story contains battles, but not in the least graphic or gratuitous.

Adult content: none, really, as before. There are a few embraces and kisses exchanged, a touch of romance, but clean and not gratuitous, G rated. (Even Belle and Beast kissed at the end of Beauty and the Beast.)

Christian content:
The center of this book, as in The Sarian's Sword, concerns Dependence on God or Self, at the two extremes. Renaud is from the dimension of War, and has been trained to be the one everyone else must depend upon. He looks to no one else, even God, for help, and expects that God has equipped him to handle anything God throws at him. Mary, from Jantz, depends entirely on God, and assumes God will never throw anything at her that God won't handle on His own, and therefore usually doesn't think before she acts.

Bottom line:
I did not find Mary very likeable through the first portion of this book, as I am more from 'War' than 'Jantz', but I expected that both she and Renaud would have an epiphany somewhere in the middle, and I was not disappointed. The book is well-written, fast paced, and an entertaining read with a good thought-provoking moral lesson.
*I received an electronic copy of this book for an honest review.

You have subscribed to alerts for Robert J. A. Gilbert.

Would you like to favorite Robert J. A. Gilbert?

You have been added to Robert J. A. Gilbert's favorite list.

You can also sign-up to receive email notifications whenever Robert J. A. Gilbert releases a new book.