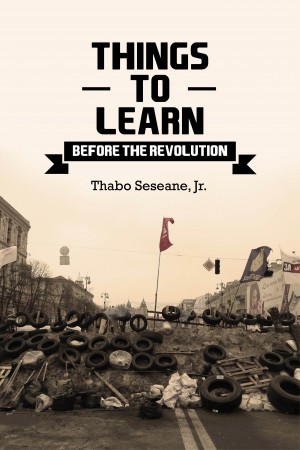 Things to Learn Before the Revolution

By Thabo Seseane, Jr
This is the world's first anti-affirmative action novel. It exposes the maladroit BEE type in the person of Disney Thoabala, CEO of a Johannesburg advertising agency. Disney's foils are his employees Thati Setati and Pat O’Shea. Ultimately, Thati's leftist critique identifies BEE with the imperialist project which, for example, launched the "humanitarian" wars in Libya, Syria and Ukraine. More
'Things to Learn Before the Revolution' is a critique of Black Economic Empowerment and affirmative action, the "redistributive" policy of the African National Government. The child of the negotiated settlement between the National Party regime and the ANC, BEE or broadly, “transformation” is the meant to effect reconciliation between black and white. It will supposedly eliminate or at least reduce inequality, but its implementation proceeds in the face of mounting inequality in South Africa, which by some measures is now the world’s worst.

To be fair, BEE has absolutely been transformative in the lives of its beneficiaries. It has enriched a layer of business people who are the poster boys and -girls of capitalism with a social conscience. Unfortunately, this minority in most instances are connected to the highest echelons of the ruling party, bolstering the criticism that BEE is nepotism by another name. The irony is that the policy’s intends to give preference in employment and business contracts, to suitably qualified candidates from “previously disadvantaged backgrounds”.

'Things to Learn Before the Revolution' puts the lie to this. It exposes the worst ineptitudes of the new breed of politically-minded tycoon, in the person of Disney Thoabala. The chief executive of Dimension, a Johannesburg advertising agency, the strident Disney has made a name for himself as a mouthpiece for various government departments and state-owned entities. While the private sector always shunned him, he finds, late in the second Mbeki administration, that there are limits to how far a “100% black-owned” company can reach. Even political accounts become increasingly elusive, and he takes his employees on one wild goose chase after another in the desperation to scale up.

The foils for the maladroit Disney are Thati Setati, a copywriter, his creative director Patrick O’Shea and art director Bingham Magubane. Through their eyes, we relive the indignities of working for a quixotic taskmaster. But Thati and O’Shea are not just dumb observers of their fate at Dimension. Their discussions touch on the Truth and Reconciliation Commission, nuclear Armageddon, divorce, indigenous knowledge systems, Rosicrucianism, Stalinism, popular music and more. They analyse their own condition as well as the condition of workers worldwide. In the end, Thati develops a leftist critique of BEE within global capitalist property relations, and points the way to its overthrow.

A contributor to the World Socialist Web Site, Thabo Seseane, Jr. was born in Durban, South Africa in 1973. He qualified as a copywriter at the AAA School of Advertising and has spent more than a decade at various agencies in Johannesburg. His strangest, most memorable experiences of this time form the basis of 'Things to Learn Before the Revolution'.

You have subscribed to alerts for Thabo Seseane, Jr.

You have been added to Thabo Seseane, Jr's favorite list.

You can also sign-up to receive email notifications whenever Thabo Seseane, Jr releases a new book.