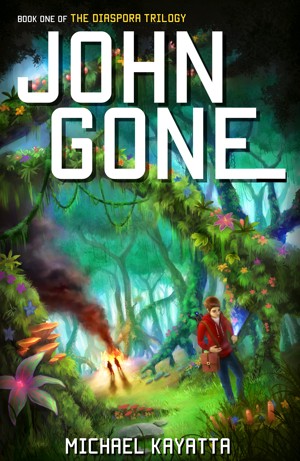 By Michael Kayatta
Rated 4.25/5 based on 4 reviews
After finding a mysterious wristwatch buried in the sand, sixteen-year-old John suddenly finds himself teleporting farther and farther away from his home each day when the hands strike 3:14. Unable to deactivate the device or remove it from his arm, John must do what he can to survive when its dangerous creator comes looking for his lost invention. John Gone is Book One of The Diaspora Trilogy. More
Sixteen-year-old John has stumbled across an abandoned wristwatch half-buried in the sand behind his house. Curious, he places it on his wrist; to his surprise, it won’t come off.

Suddenly, each day at 3:14 P.M. John begins to uncontrollably teleport around the world. He might materialize anywhere--a burning African desert, a Canadian forest, even a Siberian prison--and must do what he can to survive until 3:14 A.M. when the watch takes him home again.

But John's adventures come with a price ...

Review
Hannes Birnbacher reviewed on June 1, 2016
(no rating)
Okay, it's a Novel around crime and punishment, responsability and moral, the wrong girlfriend and true love. But is'nt it set a little bit too high? For heavens sake, there is sort of a re-born aegyptic pharao giving philosophical advices!

Science Fiction as the evolution of todays developments is rather weak. Yeah, there exist commercial enterprises who would imprison or kill employees for more profit, that's the social aspect. Okay, there is a funny wrist watch which can do tricks, but that's all what is "scientific".

Last not least, the book is part one of a trilogy and not complete by itself; it ends like it has begun, the hero is still trying to regain his freedom, which is, like in the whole book, incredible difficult.
Two stars in my system is: enjoy, don't keep, don't buy more...

Reads well, but the plot foundation seems improbable. Large leaps in technology and knowledge seem unlikely in the vacuum described.

This is one talented writer and one well-written book. Had a really hard time putting this book down - it cost me a good night's sleep! Well thought out, including how teleportation is resolved here - which, in itself, opens so many possibilities... There are some harsh moments in this book and mirrors possible real-world consequences of working with technology, power and decisions that are way over your head.

This was an excellent read. New twist on a teleportation story. Well done!

I liked this book, It had a good plot and a nice grey area between the goodies and the baddies. I suspect it will suit younger readers more than older. It poses an interesting question. Would you chance sacrificing your life for the chance of saving the life of someone you don't know?

You have subscribed to alerts for Michael Kayatta.

You have been added to Michael Kayatta's favorite list.

You can also sign-up to receive email notifications whenever Michael Kayatta releases a new book.