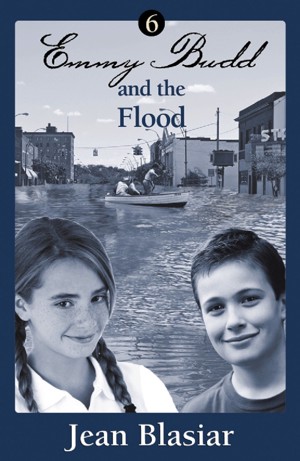 Emmy Budd and the Flood

By Jean Blasiar
It started as a wicked summer storm and became a flood that found Emmy and T. J. traveling by boat and helicopter to help save the town, its inhabitants, its pets and some unusual guests swept downstream by raging waters. More
Emmy's first introduction to children of a very different upbringing came at the height of a storm that turned the streets of Jerseyville into a raging river. Arriving in the middle of the storm were families with dress and customs and language that Emmy and T. J. never knew existed. As Jerseyville residents hunkered down in the high school gym emergency shelter, a band of robbers took advantage of the noise from the lightning and the thunder to cover a break-in at the bank. For Emmy and T. J. two days and nights without power were both scary and exciting while they hovered by helicopter, buffeted by wind and rain, climbing down and back up with emergency supplies as they clung to a rope ladder and each other. The flood was an adventure that both Emmy and T. J. would never forget and one that the citizens of Jerseyville would talk about for years to come. But still, days after the waters receded, Emmy and T. J. had to discover how those robbers got away.

The Emmy Budd series is dedicated to all little girls who lived in a simpler time when hometown adventure could be found waiting around every corner. Ms. Blasiar resides in California and is currently at work on her next Emmy Budd novel.

You have subscribed to alerts for Jean Blasiar.

You have been added to Jean Blasiar's favorite list.

You can also sign-up to receive email notifications whenever Jean Blasiar releases a new book.