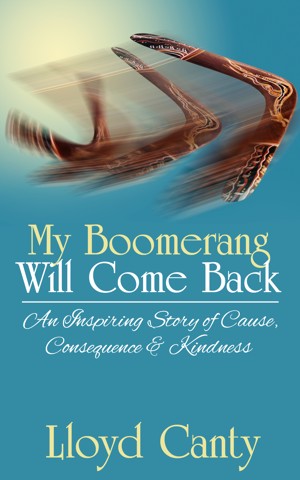 My Boomerang Will Come Back – An Inspiring Story of Cause, Consequence & Kindness

If you find your "boomerang" isn't coming back, this book will show you how to change your grip on life and start throwing yourself out there in a whole new way.

At the end of the story are a set of steps that will guide you to create a new dream for your life and get your boomerang to come back.

"I so enjoyed reading this story! Reading this made me realize I have been in the same place as the character in your book. I have been waiting for my boomerang to come back while life is rapidly passing me by. Now I finally have the right steps to move forward! You are a good writer and a great story teller! I loved it!" Joanne Marie – Botswana, Africa

"As a boomerang thrower, I fully endorse this book as an excellent foundation to anyone's life who seeks total prosperity. Let me know when your next book is finished, would love to be one of the first to read it." Mike Kern - Maui, Hawaii

From an early age, I was curious about spiritual things. I wanted to learn as much as I could about the reason for my existence. In my teens my daily practice included meditation and Hatha Yoga and and I focused my studies on both Eastern and Western aspects of spirituality from the tenants of mainstream and Esoteric Christianity to the principles of Buddhism, Metaphysics, Theosophy and Mysticism. I also spent time learning the finer arts of boomerang throwing from an elderly Australian Aboriginal. He started my interest in the mystical Aboriginal practice of Walkabout and DreamTime. I figured that if Aboriginals have successfully practiced the art of Walkabout for a few thousand years, I might as well give it a try. So, after completing my academic studies, I left Australia and went Walkabout on my own spiritual trek. My journey led me throughout Europe and the United States where I sojourned at key spiritual centers on both continents. By a strange twist of fate I ended up working for an extremely wealthy family in the southern part of Switzerland. After a few years I traveled to Mt. Shasta, California. Many of my free hours were spent contemplating that most glorious of mountains. After four years of relatively reclusive living, I headed south and eventually created a successful company called Longevity Formulas. My wife and I later moved to Hawaii where I worked for a major international corporation. While living on Maui, I was instructed by two of the most preeminent Aikido teachers in the world: Suzuki Sensei and Curtis Sensei, together with Vipassana training by Kamala Masters and Steve Armstrong. During that time, I experienced a serious spinal injury. The Walkabout I had begun so many years before had now turned into a Walkabout through the Dark Night of the Soul, where everything in my life began to fall apart and was stripped away. It was during this time of renewed walkabout that my life began to take on a whole new meaning. This process inspired me to write about these steps, knowing that so many people are going through dramatic life changes. I decided to put all that I had learned in story form, the result being the publication of my first book, “My Boomerang Will Come Back” and subsequent series of Metaphysical novels such as, “The Blue Mountains” and it’s sequels, “Journey to the Temple of Mu and “Letters from Lemuria.” So many people have been impacted and inspired by these books. I will continue to write these stories for this reason.

You have subscribed to alerts for Lloyd Canty.

You have been added to Lloyd Canty's favorite list.

You can also sign-up to receive email notifications whenever Lloyd Canty releases a new book.