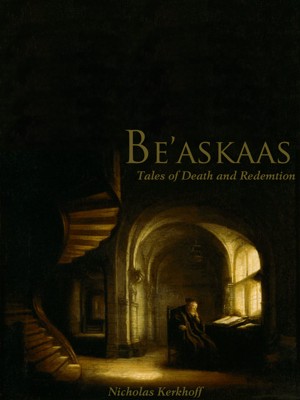 Be'askaas - Tales of Death and Redemption

By Nicholas Kerkhoff
Rated 4.50/5 based on 2 reviews
The lives of two brothers are forever altered when they become apprenticed to a necromancer. More
Two young brothers are cast out into the hard world when their inebriated father loses the family farm. Their only option is to become apprentices for an elderly necromancer many miles away. It’s a disgusting occupation which society fears and despises. The poor rural kids know little of magic and even less about the world at large, but through a series of wizardly jobs and perilous adventures they begin to learn the true nature of power and the potential of their new dark art.
Download: epub
Price: Free! USD
Add to Library
Create Widget
Tags: zombies wizards necromancer necromancy magic and wizards dark arts magic and adventure
About Nicholas Kerkhoff

An author from Santa Cruz, California. I write, I surf, I web. I have diverse interests. Recently have been working mostly on sci-fi and fantasy. My influences range from Patrick O'Brian to Kerouac, Proust to Heinlein, and (of course) Tolkien.

Honestly, I have a hard time sub-categorising Be'askaas - Tales of Death and Redemption. Yes, at its core it's a fantasy novel. It has sorcerers, Earth witches, Niads, demons, necromancers, gods, dragons and zombies. No question about it. It's a fantasy novel. But somehow it doesn't have the whimsy I associate with the upbeat contributions to the genre, it isn't epic (though there are a couple long treks), and somehow despite its subject matter I wouldn't call it dark fantasy either. It's...philosophical...maybe.

As the two young students, Rafe and Gywn, spend their first year in the company of the necromancer, Yulsef, they learn how little they understood of the world around them and some important life lessons. The reader, by extension, does too. I consider these lessons more important that the story that encompasses them; simple gems like knowledge complicates life. It's much easier to live in comfortable ignorance than to separate yourself from the herd with true understanding. It's really particularly genius that the characters are so young. Their minds are relatively uncluttered to start with. So while they spend a lot of time gaping in amazement, there is very little unlearning necessary.

The book is slow. I don't mean in a 'god, please let something happen soon' kind of way. Plenty happens. Rather it is paced and methodical, so that was all good. I only had two true complaints. One, there are quite a few characters introduced in such a short book and often the POV would shift to these new characters before they were introduced. This threw me every single time. Second, I probably would have given the book five stars if it had a little bit more of an ending. I suspect there is a lot more to come. After all one year in the life of a 10 and 13 year old apprentice leaves plenty of room for more and the inkling of civil unrest sets the stage for future adventure. It's just that this book feels unfinished. It's only 118 pages long and ends abruptly, with no real wrap up. No real task accomplished or quest finished, either for that matter. There isn't any real indication of why it should end when it ends. It just does. I was let staring at the phrase "to be continued..." with a distinct sense of dissatisfaction.

(reviewed the day of purchase)
Sandra Hould reviewed on March 17, 2013

This book was a great introduction to the Be'askaas series. I could not put it down and it offered a new way of seeing things as well as seeing zombies as being different beings. Seeing how life and death, magic and daily life dance their eternal dance was perfectly told in this story and I can't wait to see the next installement in the series.

You have subscribed to alerts for Nicholas Kerkhoff.

You have been added to Nicholas Kerkhoff's favorite list.

You can also sign-up to receive email notifications whenever Nicholas Kerkhoff releases a new book.