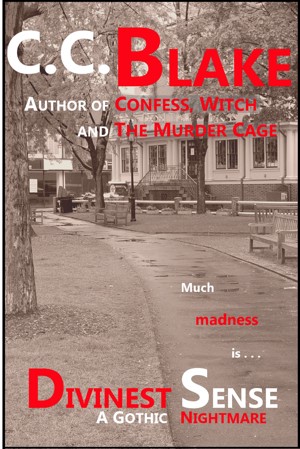 By C. C. Blake
To save his wife from madness, Victor swears he would do anything. Might the price end up being too high? In this thrilling tale of gothic suspense, C. C. Blake explores madness, the macabre, and strange science in his most provocative tale yet. More
"Much Madness is divinest Sense . . ."

The year is 1864. Victor von Hielzen visits his wife in an asylum. In his pocket, Victor carries a mysterious vial whose contents will end his wife's suffering. Using it, Victor embarks on a terrifying journey, the conclusion of which may hold the key to restoring Elizabeta von Hielzen's soul and sanity.

With "Divinest Sense," C. C. Blake brings us his most ambitious work yet, an 8000 word novelette that echoes Bram Stoker and Mary Shelley's great gothic nightmares. Madness, murder and passions lurk in this thrilling neo-Victorian tale.

C.C. Blake has lived across the United States, starting in the suburbs of Detroit, to Massachusetts’ second largest city (Worcester) to the country’s seventh largest city (San Antonio, Texas, that is). He’s has a variety of jobs, working as a substitute teacher, the graveyard shift dishwasher at a haunted Denny’s, lab research monkey and teaching assistant at a second tier college. Currently, he works as an automation consultant for a chemical company on the Northeast side of SAtown (which isn’t as Hellish as it sounds).

Blake’s most popular character, irrepressible adventurer Chuck Cave, has appeared in over two dozen stories, including the 2005 Man’s Story 2 Story of the Year Award winner “Chuck Cave and the Vanishing Vixen.” The character’s supernatural thriller stories (which began with the seminal “Cave and the Vamp”) are all being released as a part of Vampires2.com’s initial foray into e-books. These new versions are presented in expanded and revised versions, all are the author’s preferred texts. Be sure to collect them all!

In addition to his pulp stories for the 2-Empire (Man’s Story 2, Vampires 2, Androids 2 and Paranormal Romance 2), Blake’s fiction has appeared in several anthologies, including Unparalleled Journeys II (from Journey Books Publishing) and Fearology: Terrifying Tales of Phobias (from Library of Horror Press).

You have subscribed to alerts for C. C. Blake.

You have been added to C. C. Blake's favorite list.

You can also sign-up to receive email notifications whenever C. C. Blake releases a new book.