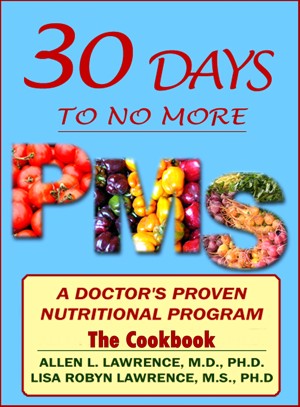 30-Days To No More PMS,The Cookbook

By Allen Lawrence
30-Days To No More PMS, The Cookbook is a proven nutritional program to help women with PMS to be easily and quickly symptom free. In our book we tell our readers, What you have eaten in the past has caused your PMS, what you eat in the future can help you totally eliminate PMS. You can forever be symptom free. There are more than 70 recipes, food plans and practical easy to use. More
PMS is a nutritional deficiency syndrome that causes women to develop and imbalance between the levels of estrogen and progesterone they make and eliminate. When their diet is correct they can make normal amounts of estrogen and progesterone and they will have no PMS symptoms or problems. When the woman’s diet has either a deficit of essential nutrients or contains too much of the foods or “PMS producing nutrients,” such as sugar, caffeine, calcium and other foods which either block the breakdown of estrogen or production of progesterone, then the woman will likely suffer from PMS.

In 30-Days To No More PMS, The Cookbook we offer more than 70 recipes including salads, soups, appetizers, main course plates, drinks and deserts. In fact, we cover all aspects of your daily diet from getting out of bed and having breakfast, to mid morning snacks, lunch, mid afternoon snacks, dinner, desert and even if you desire an evening snack. Eat as much or as little as you desire, but eat the right foods and your PMS will be history and you will be healthier than ever before.

30-Days To No More PMS, The Cookbook offers a dietary program what will allow you to lose weight, protect the health and well-being of your heart, your brain, your female reproductive system and female hormonal system. It is a broad based extremely healthy diet. You can serve every food and recipe we offer to all of the members of your family. You will no longer have to cook individual meals. Whether you or your partner are looking to protect your heart, treat or prevent diabetes, slow down aging, lower your risk of Alzheimer’s Disease we have built a basic healthy diet into every food and recipe we offer to you. All you have to do is eat, enjoy and be well!

In 1966 Dr. Lawrence graduated from U.C. Irvine School of Medicine. He performed his internship at U.S.C. County General Hospital in Los Angeles, California. Upon completion of his internship he entered the U.S. Air Force as a Medical Officer. He spent the next two years on the island of Guam working both with military personnel and their wives. Upon discharge from the Air Force he joined a General Practice in Los Angeles for one year. In 1970 he entered a residency training program in Obstetrics and Gynecology at Cedars Sinai Medical Center.

Upon completion of my training Dr. Allen Lawrence went into private practice of Obstetrics and Gynecology in the West Los Angeles-Beverly Hills area. He practiced OB-Gyn for the next 11 years. During that time he performed thousands of deliveries. These deliveries not only in the hospital but many hundreds as home deliveries and in later in a non-hospital based birthing center. Throughout this period he never lost a single mother or baby, my C-section rate was a low 5%.

In 1983 he left the practice of OB-Gyn in 1983 after developing a severe and incapacitating heart irregularity. After trying many different combinations of medication he ultimately recognized that his problem was primarily stress-related. Dr. Lawrence spent the next ten years learning about stress, healing, comparative healing systems. Eventually, this quest lead to the realm of prevention and healing people instead of waiting until they became sick to then treat them. In 1980 he earned a Master's Degree in Nutrition and in 1984 a Ph.D. in Psychology.

Lisa Robyn Lawrence has spent most of her adult life working in the medical profession. In the early 1980's Lisa's Premenstrual Syndrome became a major problem. Lisa, working with Dr. Allen Lawrence, researched the field of PMS. After learning its causes she was able to completely eliminate all of her symptoms. Using this work as her thesis, she was granted a Master of Science in Nutrition in 1984. In 1994 Lisa earned a Ph.D. in Human Ecology.

As Director of Nutritional Counseling Services at Reseda Woman's Center and later at DiversiCare Medical Group, Lisa has worked with more than 3,000 women. For more than fifteen years Lisa has had a nutritional practice helping people with problems such as PMS, menopause, pregnancy nutrition, weight reduction, high blood pressure, diabetes and many other nutrition problems.

Besides her nutritional practice Dr. Lisa Lawrence works with men and women counseling them on alternative and natural healing techniques and treats, Stress, Stress-Related Disorders, illnesses either created by stress or made worse by it.

Today Drs. Allen and Lisa live and work together in Desert Hot Springs, California and are Co-Directors of Health Education Associates and Desert Wellness and Healing Seminars providing health education through lecturing, seminars, publishing and the internet. Dr. Allen Lawrence, no longer practice standard Western medicine. They now work with alternative medicine techniques and educate and counsel men and women in wellness and illness prevention. Their work is based on Integration of Mind, Body and Spirit and problem solving to prevent and heal illness, nutrition and lifestyle transformation.

You have subscribed to alerts for Allen Lawrence.

You have been added to Allen Lawrence's favorite list.

You can also sign-up to receive email notifications whenever Allen Lawrence releases a new book.