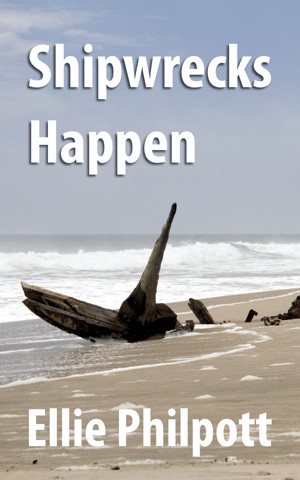 By Ellie Philpott
When Catherine inherits the huge Art Deco house at Gull Cove she is amazed. The house is a legacy from her aunt Ozzie, but Catherine thought Ozzie had died long ago and had no idea a family home existed. The only people who can help Catherine solve the mystery of her family are the current occupants of the house. She drives out to meet them, unaware her life is about to change for ever. More
Shipwrecks Happen is a beautifully crafted story of love, loss and renewal set against the backdrop of an iconic Art Deco house located on the edge of an isolated, windswept beach in Kent. It is peopled with characters that will remain with you long after you have turned the final page.

When Ozzie moved back to her grandfather’s huge four-storied Art Deco house at Gull Cove, she began collecting people around her. The vast upper room at the very top of the building was turned into studios for local artists and during weekends, the house played host to a seemingly endless round of glitzy parties.

But when the money began to run out, people drifted off, leaving Ozzie alone with her four grace-and-favour tenants; Isaac, a retired local fisherman; Milly, an elderly actress who had been a close friend of her mother’s, Toby, an artist who suffered a breakdown when his wife left him some years previously and his young son Noah, who refuses to attend school and spends most of his time running wild on the beach with his dog Oscar.

And now Ozzie is dead, succumbing at last to the cancer that had been eating away at her for the last year. The house has fallen into serious disrepair and urgently needs major renovation work. Ozzie has chosen to leave the house to her niece, Catherine, who was under the impression that Ozzie died years ago and wasn’t even aware there was a family home to inherit. Catherine is a virtual recluse and leads a lonely existence writing books and avoiding people. The fate of the house and its occupants lie in Catherine’s hands, and she is about to discover that the house holds more secrets for her than she could have imagined…

Ellie Philpott grew up in Kent, before she spent a number of years travelling around the world for various employers, including a Dutch human rights agency. Her most vivid memories of her work include being held up at gun point in southern Mexico, spending time trapped in the fighting in the West Bank during the second Intifada and dodging the authorities in Vietnam. Her life is a bit tamer now and involves writing and managing the PR for a French company. Ellie lives in Kent once again, with her husband and Eric the puppy, Fudge and Toffee the call ducks, four chickens and several hundred thousand bees spread across four hives. She is also the author of My Enemy My Friend, a non-fiction book describing her encounters with Palestinians and Israelis involved in various reconciliation projects.

You have subscribed to alerts for Ellie Philpott.

You have been added to Ellie Philpott's favorite list.

You can also sign-up to receive email notifications whenever Ellie Philpott releases a new book.