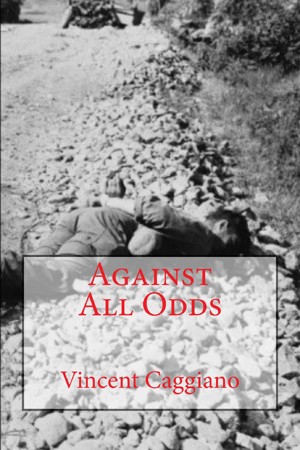 So it was that Vinnie finds himself in Korea in 1950. He is there only two days before his unit is overrun by the enemy and Vinnie is taken prisoner. After a frightening escape, Vinnie finds himself behind enemy lines, wounded, in an inhospitable climate, enduring freezing temperatures, snow, and rough terrain, trying to find his way back to American forces.
Vinnie is a meek mild-mannered radio technician and has had no combat training. As he struggles to improvise, fighting for survival against a brutal enemy, he goes through a metamorphosis. The cowardly innocence of youth is transformed to a hardened killer in a matter of days and Vinnie is surprised himself to find that he looks forward to the next opportunity to kill the enemy.

Through a series of flashbacks, we learn about his earlier life growing up in NYC during the 1930's and 40's. This was the time of the Mafia and the great depression, a difficult time for our hero who relives several episodes of his past.

Just as Vinnie is about to lose hope, he comes across a beautiful Korean girl who he rescues from a disastrous fate, and together they continue their trek for survival. His new companion proves to be invaluable in their struggle to survive, as well as becoming the object of a budding love. Can this unlikely couple survive, and can their new love survive the torments of such disparate backgrounds?

Vincent Caggiano is a graduate of The University of Maryland with degrees in electrical engineering and applied math. He was inaugurated into the honor societies Tau Beta Pi and Eta Kappa Nu, and continued with post-grad work at The University of Michigan, Ann Arbor, in Biomedical Engineering.

While continuing his studies, Vincent worked at the Johns Hopkins University Applied Physics Lab starting as an academic scholarship in 1955, and later as a research engineer, he worked on missile programs, artificial intelligence, space studies including a Mars probe, and early satellite programs. During the latter, he was a member of the team that developed GPS, a story that he hopes to write about in another book. During this period he also taught computer logic in the University of Maryland graduate school.

His interest in artificial intelligence led to an offer to join a team at The Walter Reed Institute of Research in Washington DC, to study single brain cells. His innovative approach resulted in the development of new instruments to record single brain cell activity, and later he was part of several teams studying Parkinson disease, physiological shock, patient monitoring systems, and a variety of other programs, where he developed additional new instruments.

Vincent founded Biomedical Electronics, a small company devoted to the development of patient monitoring and medical instruments. This company was integrated into ILC Industries, the supplier of the early space suits for astronauts. After retiring from scientific areas of endeavor, Vincent's attention turned to boating and marine activities in Virginia, then retirement.

Vincent is now retired and lives in Florida but continues to write, mostly fiction, a new venue for him. He has previously published 25 technical articles and research papers as well as chapters in books, and a text book on computer logic.

You have subscribed to alerts for Vincent Caggiano.

You have been added to Vincent Caggiano's favorite list.

You can also sign-up to receive email notifications whenever Vincent Caggiano releases a new book.