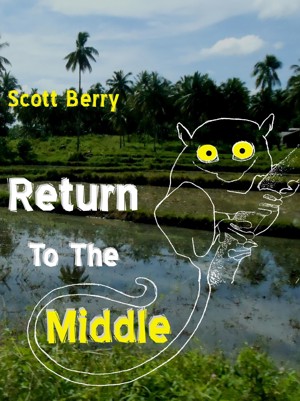 Return to the Middle

By Scott Berry, Sr
Return to the Middle is the story of one man's journey, both physically and spiritually. He had always tried to do the right thing, but seemed to miss the mark. During a short-term mission trip to the Philippines, that man not only traveled through a foreign land, but also through foreign territories in his own heart. What he experienced and discovered are in these pages. More
A Pencil

Raymond didn't have one.

Every classroom has one. We touched them in grade school. We spun them really fast when the teacher wasn't watching.

Ms. Maribel didn't have one.

A Pair of Shoes

We get our first pair before we can even walk. Most of us have three or four pairs. Some of us have fifty or more.

Kathleen didn't have one.

Most of us don't have one. We don't have a clue what God would have us do. We don't even know where to start.

Scott didn't set out to find a mission. He was just trying to do something "good". He had struggled for years, trying to the right thing, trying to find God's will -- be he was unsuccessful. He was on the edge of giving up -- really on the edge. He tried one more time -- he looked for God to open a door, and when God did, Scott walked through it.

Return to the Middle is Scott's story -- it's a story about struggle and about success. Most importantly, it's about looking for the doors God opens and then finding the courage to step through them, regardless of what is waiting on the other side.

Scott Berry is a writer, educator, and missionary. While much of his work is done as a ghostwriter, he sometimes takes time to write his own stories or poems. His ghostwriting work includes several science fiction/fantasy novels, full-length movie scripts, scripts for animated children's television programs, children's plays, and even some full length musicals.Scott lives near Albuquerque, New Mexico, with his wife, Zella, and their new dog, Tanner. Shortly after getting Tanner from a local pet rescue shelter, Scott decided to write some simple stories about their new terrier. He honestly didn't expect the stories to have such an immediate mass appeal. Because of the interest in the "Tanner the Tenacious Terrier" series, Scott is planning on writing several more of the popular tales.

Scott is also a missionary to the Philippines province of Bohol. He had visited Bohol several years ago and fell in love with the people and the culture -- and especially the children. One of his biggest concerns there is that over half of the children are unable to go to school because they don't have basic school supplies. Scott has taken on the project of providing backpacks, pencils, paper, shoes, and uniforms. In 2013, he gave out enough supplies to send 250 children to school His goal for 2014 is 800 children. You can visit his mission website at www.EducateBohol.org

You have subscribed to alerts for Scott Berry, Sr.

You have been added to Scott Berry, Sr's favorite list.

You can also sign-up to receive email notifications whenever Scott Berry, Sr releases a new book.