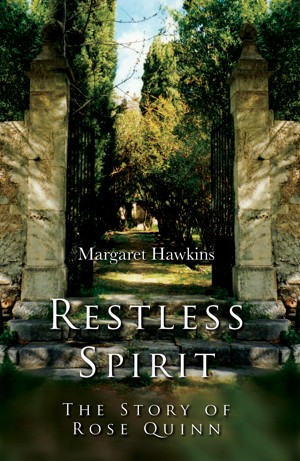 By Margaret Hawkins
Rose Quinn died in an asylum less than a year after being committed by her brother for refusing to live with the man she had been forced to marry. The story remained a family secret for three generations. This is the story of Rose and how her family brought her story to light in the 21st century, a testament to her and others who suffered this cruel fate. More
‘And then there was Rose …’ – five little words that catapulted Wexford woman, Patricia Quinn, into a dedicated search for information about the great-aunt she never knew.
Rose Quinn died in an asylum less than a year after being committed. Such was the stigma attached to having a relative in the asylum that Patricia’s father, John Quinn, only told her about this shortly before he died.
In the course of subsequent research Patricia was shocked to discover many coincidences between her life and Rose’s. There was also an unexpected spiritual connection between Rose and Patricia’s daughter, Catherine, that was to result in finding Rose’s burial place – a plot behind the asylum, now known as St Senan’s Hospital.
This fascinating book interweaves the search for information about Rose with a reconstruction of her life in novel form. Rose Quinn had to become a restless spirit to have her story told. This is it.
Available now in a brand new, updated paperback and Kindle version at Amazon.com.
Available ebook formats: epub mobi pdf rtf lrf pdb txt html
First 15% Sample: epub mobi (Kindle) lrf more Online Reader
pdb
Price: $3.99 USD
Buy Add to Library Give as a Gift
How gifting works
Create Widget
Tags: psychic womens studies irish history social studies family story psychic experience historical biography historical 1900s irish historical mental institutions docufiction history of mental health
About Margaret Hawkins

MARGARET HAWKINS has been working as a freelance journalist since 1990 and writes feature articles principally for the Irish Farmers Journal. She has been the paper’s health columnist since 2003. She has had short stories published, one-act plays staged and her radio essays have also been broadcast on RTE 1’s Sunday Miscellany and published in two of its anthologies. Her first novel, Deny Me Not, was published in 2013. Margaret lives and writes on a farm in County Wexford.

You have subscribed to alerts for Margaret Hawkins.

You have been added to Margaret Hawkins's favorite list.

You can also sign-up to receive email notifications whenever Margaret Hawkins releases a new book.