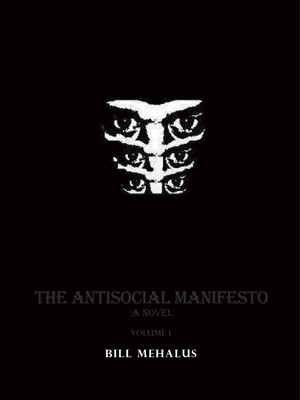 The Antisocial Manifesto: A Novel Volume 1

By Bill Mehalus
"Riveting! Shocking! The Antisocial Manifesto (revised edition) is a gripping novel that follows the life and times of Antisocial Personality Disorder from childhood into adulthood. It's a book of abuse, frustration, rejection, drug & alcohol addiction, alienation, sadness, manipulation, humiliation, crime, death, hate, sarcasm, humor, insight, redemption, and strangely enough, love. Enjoy! More
The author of an expansive memoir, The Antisocial Manifesto, wants the world to know all about him, and yet he chooses to remain anonymous—which paradoxically frees him to speak personally about his experience with mental illness. Part radical philosophy, part psychological
excavation, the book is a collection of six volumes that documents the author’s life from before birth to his midlife diagnosis with antisocial personality disorder, a mental health condition characterized by a persistent pattern of manipulating, exploiting, or violating the rights of others.

In The Antisocial Manifesto, readers find many familiar elements of memoir—childhood trauma, troubled teen years, and some serious mistakes in early adulthood—but, in the author’s case, these experiences escalate into out-of-control behavior that lasts well into midlife.
Symptoms of antisocial personality disorder include criminal behavior, drug abuse, and aggression. The author experiences all of these and displays a lack of guilt or remorse, which is also a common feature of this difficult-to-treat disorder. Violent episodes, such as when he runs over a person with his car, are reported but not necessarily regretted, again demonstrating the
validity of the author’s diagnosis.

At turns academic, witty, angry, and profane, the author shares not only the details of a violence-filled childhood, but also his innermost thoughts. His detached perspective may be unsettling to readers at times, but this look into his mind helps to explain the rough road he has traveled. While illuminating, such details can also be overdone, and the author’s extended examinations of his many ideas can become overwhelming.

Context for the autobiographical details is provided at the head of each chapter, where the author has collected news headlines from the year under consideration along with a provocative tally of human population growth. Also unnerving are the author’s photographs, which run the expected time line from his own baby pictures to those of his children. These, however, are not Kodak moments. In a compelling illustration of his psychological detachment, the author has blacked out his own eyes in every picture.

Intrepid readers will venture beyond the biographical explorations and into philosophical arguments against religion and in favor of science, all supported by complex, logical arguments. The author provides plentiful documentation for his overarching “anti-theist” position and demonstrates his intelligence, knowledge, and persuasive powers with each new argument—for
those willing to follow every tangent and overlook the occasional typographical error.

The intriguing question posed by this book is whether the author has been appropriately labeled with a mental illness when, in fact, he is really a radically creative thinker who chooses to go against the grain of society’s moral codes. There is a good case made for both explanations, which is what keeps The Antisocial Manifesto interesting.
Download: epub mobi (Kindle) pdf more Online Reader
rtf lrf pdb txt
Price: Free! USD
Add to Library
Create Widget
Tags: love hate psychology religion drugs aspd
About Bill Mehalus

I began this book in 2005 following legal issues, which directly influenced my current position in life. Consequently, I began to think, "Who are these people to judge me?" After all, the legal system is composed of a "Board of Directors" (judges and magistrates) established by voters within a community who have common standards of living for which they want upheld. These standards of living are founded upon both civil and moral codes from which they find comfort for themselves and their daily lives. Accordingly, these codes were passed down and modified from generation to generation, while always remaining deeply rooted in some fictitious higher being which they called "God;" i.e. commandments/law. However, their standards, civil and moral, are not my own. So I will attack it!

I was once a Marine, a biology student, a medical student, a criminal, a computer science student, a husband, a father of two children, then a divorcee and the father of two dead children. Now, I'm just a normal guy. I have no certifications, awards, titles, etc. Typically, I'm not even called Mister. I don't have a career, because I find it very difficult to keep a job. My longest job was the Marine Corps and that's only because I couldn't leave when I wanted to. Currently, my life revolves around my dogs as I have so much to learn from them. They have no shame and neither do I (for the most part). And this is the core of my problems. With that said, perhaps we'll cross paths one day as I ring up your movies or groceries, or perhaps, ask you for directions, but you'll never know just who you're talking to. You'll just initially think, "What a nice guy." However, really, I am Syphilis, the Great Masquerader!....or perhaps, I'm merely a pile of dog shit in the high grass.....I live happily, peacefully, unnoticed, untouched, without judgment...because I am unnoticed, untouched and quietly minding my own business. I have no intentions but to live out my life in the high grass, snoozing in the semi-shaded sun, providing a little nitrogen for the grass that has provided me with a soft bed. I didn't ask to be here, but this is where I was dropped. I am the product of your Best Friend or someone else's. Then you came along and stepped on me. As a result, I oozed between your toes or the tread of your shoe. Only then did you know me and call me by my name, "SHIT!" The moral: you stepped on me and I responded! Religious buffoons, I am talking to you! You wanted an 'End of Days'? You wanted a Monster? You got it! This is the Bible of the New Era...a book written for Generations X, Y and Z. We are Modern Religion!

Propaganda
Propaganda video for an organization which should exist

You have subscribed to alerts for Bill Mehalus.

You have been added to Bill Mehalus's favorite list.

You can also sign-up to receive email notifications whenever Bill Mehalus releases a new book.