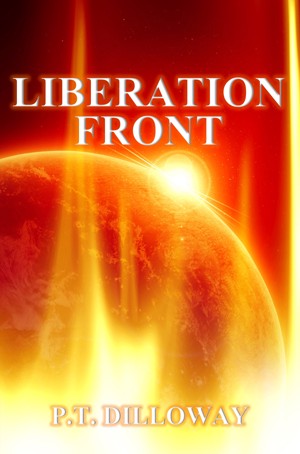 By PT Dilloway
Major Sandra Jordan never questioned why the Martian Expeditionary Force came to Earth. They were there to return order to the planet, to liberate their fellow humans. But after witnessing a brutal massacre by a superior officer, Sandra realizes that her people have come to conquer, not to liberate. And so a new war for freedom begins.
Available ebook formats: epub mobi pdf rtf lrf pdb txt html
First 20% Sample: epub mobi (Kindle) lrf more Online Reader
pdb
Price: $0.99 USD
Buy Add to Library Give as a Gift
How gifting works
Create Widget
Tags: scifi adventure action military space opera dystopia war
About PT Dilloway

Patrick "P.T." Dilloway has been a writer for most of his life. He completed his first story in third grade and received an 'A' for the assignment. Around that time, he was also placed in a local writing contest for a television station, receiving an action figure in lieu of a trophy, thus securing his love with the written word. Since then, he's continued to spend most of his free time writing and editing. In the last twenty years, he's completed nearly forty novels of various genres. When not writing, P.T. enjoys reading and photographing Michigan's many lighthouses. In order to pay the bills, he earned an accounting degree from Saginaw Valley State University in 2000 and for twelve years worked as a payroll accountant in Detroit.

You have subscribed to alerts for PT Dilloway.

You have been added to PT Dilloway's favorite list.

You can also sign-up to receive email notifications whenever PT Dilloway releases a new book.